Workers atf the JSS office in Idukki, which is managed by MAM, in celebration of Onam, pledged to distribute 1000 packages of food staples to the poor and needy over the next few months. In a function held last week, Sri K.K. Jayachandran (MLA – Udumpanchola) handed out the 108 first bags. 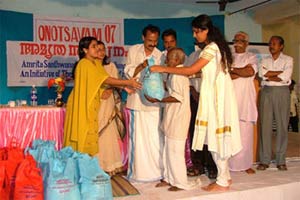 One elderly recipient was too frail to attend the function, so the package was brought to her instead. At 85 years, she lives in a dilapidated shack near a hospital. 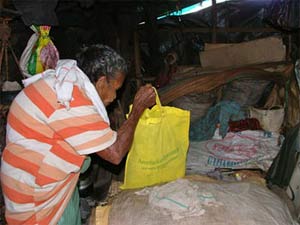 The JSS is also helping a number of remote tribal villages in the Idukki District of Kerala to become economically stable while maintaining their cultural traditions and values. During a recent visit, the villagers asked the staff members what they would be giving them for Onam as it is traditional to give gifts during this holiday. 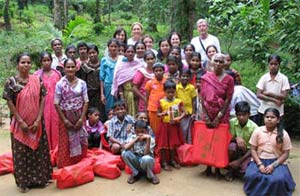 The staff members were humbled when the villagers responded that they would prefer rice rather than the traditional gift of clothing . As such, the JSS office decided to distribute food packages to them as well.

The tribal children were also given new pens and notebooks.