Amma was welcomed to Netherlands by Rabbi Soetendorp, renowned interfaith leader; Leontine Borsato, star actress; and Lucia Rijker, world champion kickboxer and star of Dreamschool, a television series in which she inspires underprivileged youths to get their life together and use their talents.

Over two days of programs at Expo Houten, devotees old and new flowed into Amma’s arms.

In his remarks, Rabbi Soetendorp said, “Amma, I feel that you are the preparer of this decade that lies before us. As a human community, we are one body. When one part of the body is in pain, the rest of the body will feel it, because if it does not, it is dead. We, as humanity, can feel the power of love and healing. Every time that you embrace a human soul, it is felt everywhere in the world. You are this force that allows the healing in all parts of our one human body to be healthy.”

Lucia Rijker reflected, “Amma is my inspiration and my role model, a role model beyond human abilities. All that Amma does is indescribable. To feel how she charges our battery and how she connects us again and again with the purity in our hearts so that we can share this love with the world. This is how I experience it. The work I do in the world is sometimes intense. I recharge with Amma and when I feel down, I think of Amma who continues sitting for sometimes 19 hours until she embraced the last person who came to see her with a supernatural perseverance.”

To commemorate the 20th year of Amma’s visit to Holland Amma’s Dutch children had prepared a special surprise for Amma. Netherlands being known as the nation of flowers, each member of the audience had a rose in their hand, and as they sang a traditional Dutch song “Hundred thousand roses for you” they passed the roses forward and slowly passed huge bouquets onto the stage and arranged them behind Amma as in a rose garden, all the while singing in unison:

In her Satsang, Amma spoke about the need to remember the true importance of the natural world, as well as realizing our own true nature, warning that we cannot take refuge in technology alone. “Man’s excessive fascination for technology, and the many illusions he builds around it, is giving him a false sense of security. Recent natural disasters have taught us that however important science and technology may be, they will never be able to replace our basic humanity. Many people had houses equipped with all modern facilities, but could not stay in them. Many had cars, but could not drive them to safety. Many had ATM cards, but could not withdraw money. Many had mobile phones, but did not have the electricity to charge them. Man will never be able to achieve complete security by relying on machines. We have to find the real security within ourselves.” 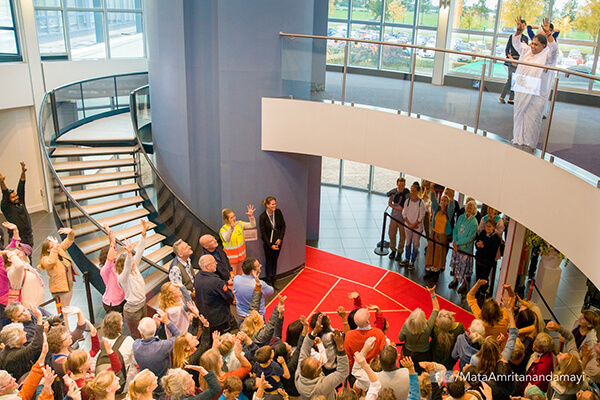 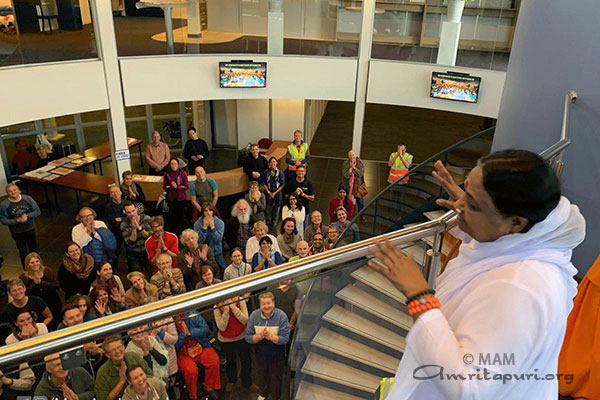 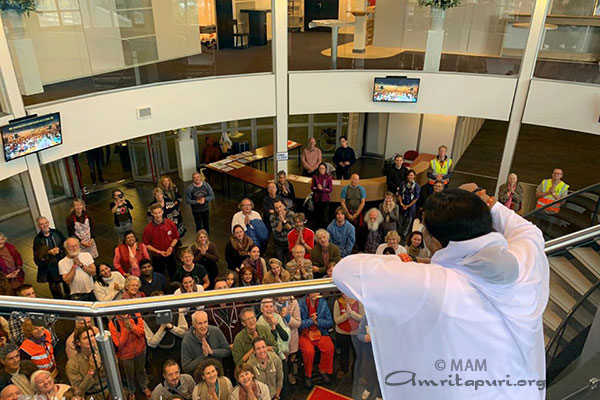 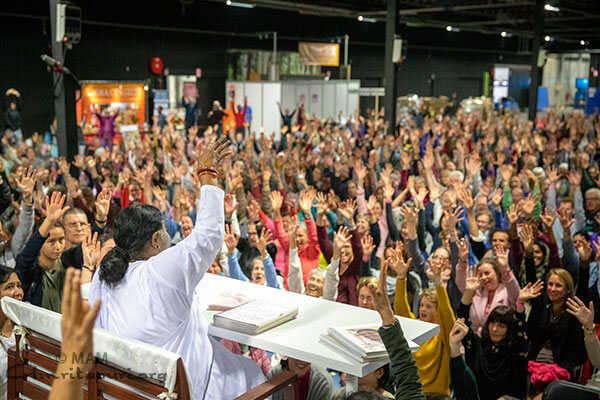 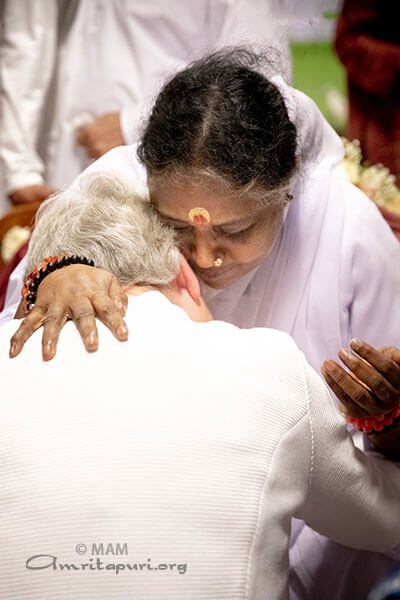 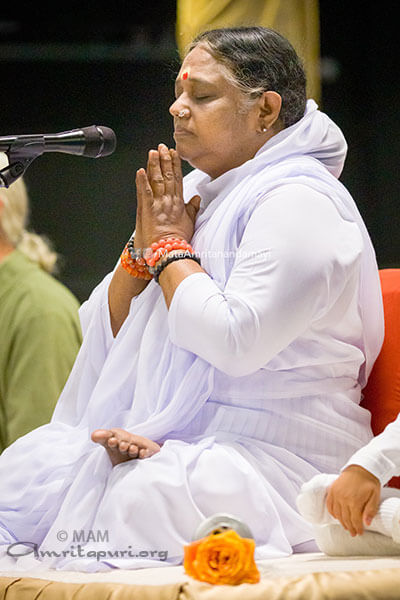 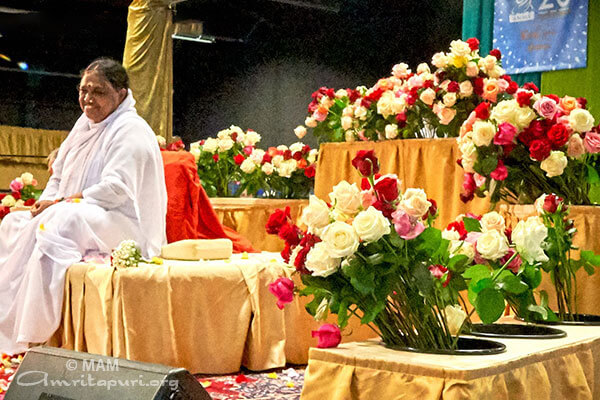 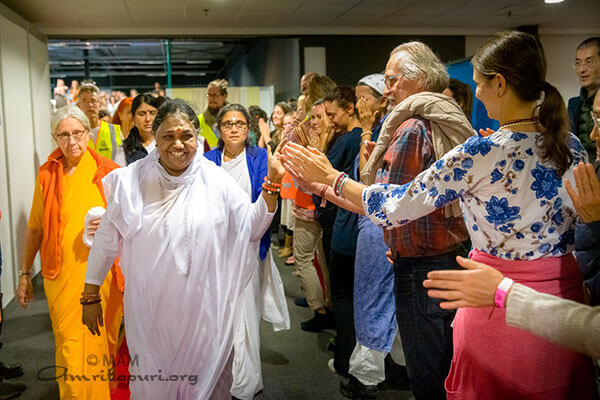 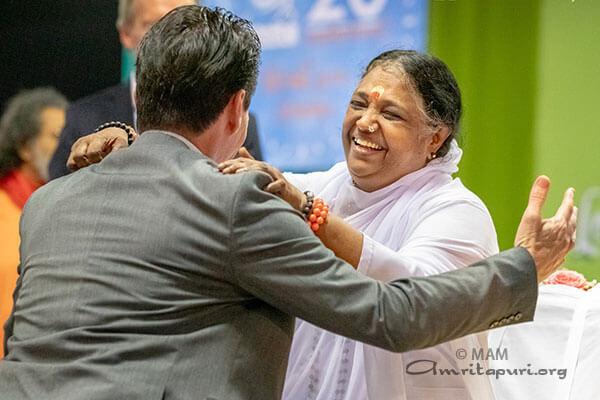 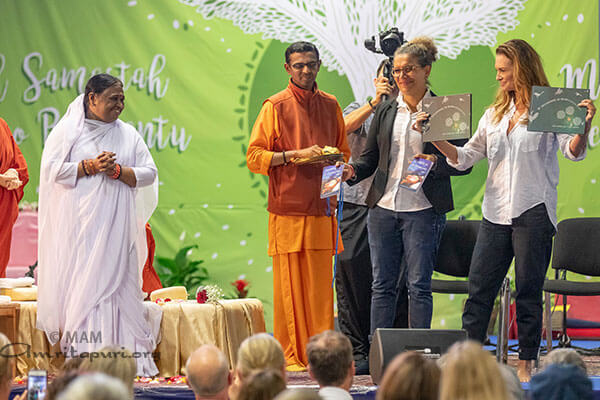