Amma’s 2019 European Yatra got off to a grand start with three days of programs at M.A. Center in Germany. Amma was welcomed to the center by a double rainbow spanning the sky as Amma set foot on European soil after traveling from India.

People from all parts of Germany, and from all over Europe had gathered to meet Amma for the three days of programs at the center. Amma was welcomed to Germany by Member of Parliament of the State Government of Hessen Mrs. Sandra Funken, Indian Consul General Mrs. Pratibha Parkar, and Brombachtal Mayor Willi Kredel.

In his remarks, Mayor Kredel said, “Everything happening here is thanks to Amma, a remarkable woman who has dedicated her whole life to uplift the poor and needy and alleviate the suffering of those suffering physically and mentally. Dear Amma, we are proud and glad that you come to us every year.“

In July 2019, 300 AYUDH Europe members took part in a dialogue with political decision-makers, among them German and European parliamentarians. It was entitled ‘Symposium on Diversity in Europe’, supported by the EU, UNESCO and the State Government of Hessen. The results of this dialogue have been summarized in the Statement on Cultural Diversity, which was presented in August 2019 at the UNESCO World Youth Conference in New Delhi.

Referring to that statement, MP Sandra Funken, reflected: “Every day we have to endure the news about war, violence and hate. I am thankful that there is someone like Amma who, through her strong personality and presence, inspires people to live a life of selfless love and service to humanity. Especially with the youth organization AYUDH, you are setting a great example. Because you realized that it is one of our core tasks to prepare the younger generation for this increasingly complex world and convey to them the principles of hope and love… I studied the policy recommendations of the Statement on Cultural Diversity very closely. The concrete suggestions made to us political decision makers by the youth are good – they indeed are very good. I think that these youth bring a light into the world, which sometimes seems to be a bit dark – this is why I gladly support the work of Amma and her youth organization AYUDH. You will surely agree that Germany, Europe and the world needs compassionate, tolerant, and engaged young people to face the challenges of the future with global responsibility. It is worth listening to those young people and incorporate what they have to say into our daily work… We are proud to have Amma here.”

Amma reminds us every day about the plight of Mother Nature and how it is our duty to do our part to restore the lost harmony between humanity and nature. In her words, “Nature is mother and father to us; it is everything. She only ever had love and compassion for us. We, on the other hand, have just stomped all over her and kicked her in the chest. Now that loving mother has fallen ill and is exhausted.”

To encourage young people, and the entire assembled crowd, to deepen their commitment to caring for and protecting nature, Amma handed over 15 native tree saplings to members of AYUDH Europe, which will be planted near M.A. Center Germany. The sight of the young people accepting the saplings from Amma was met with sustained applause from the crowd – it was as if she was entrusting the future of the planet into their hands… where it indeed belongs. 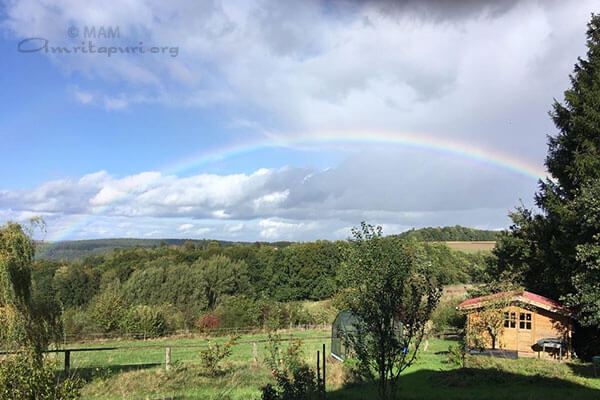 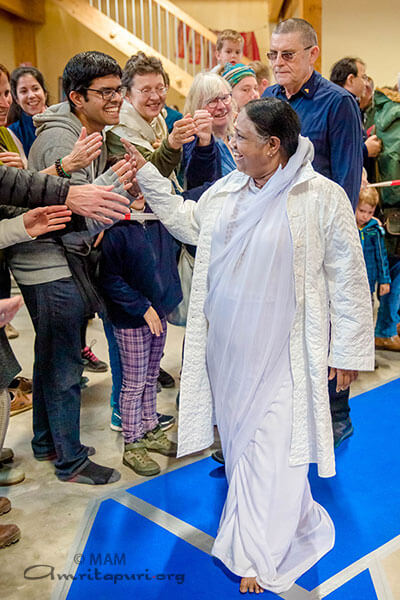 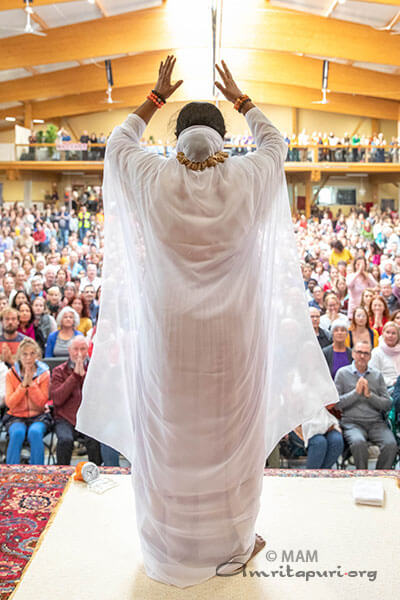 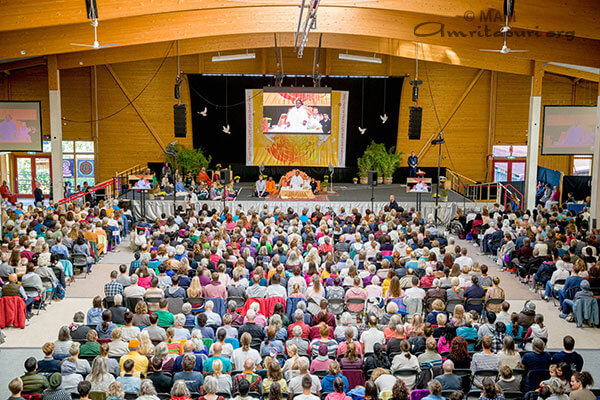 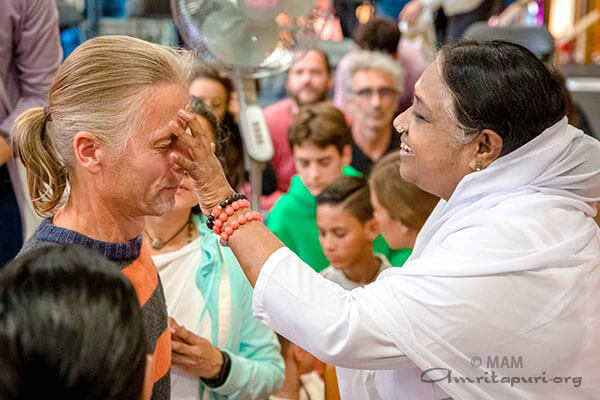 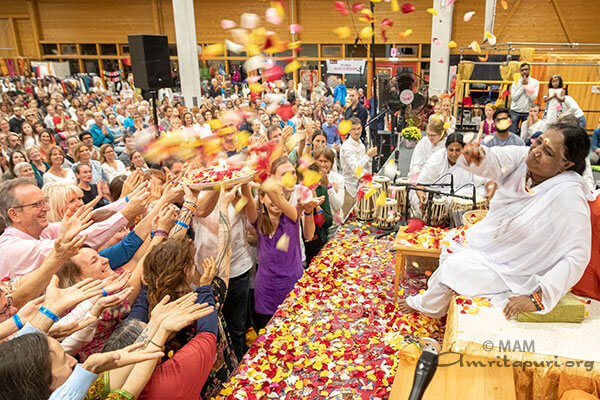 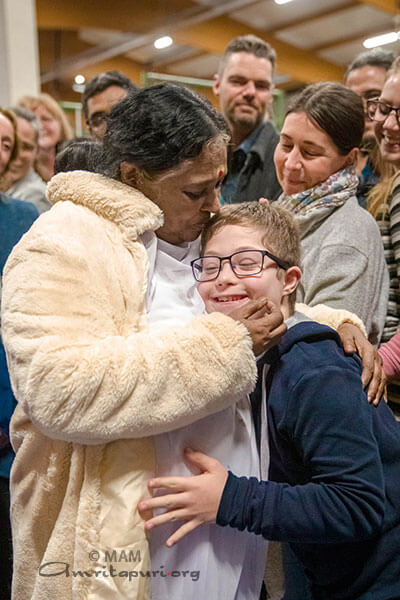 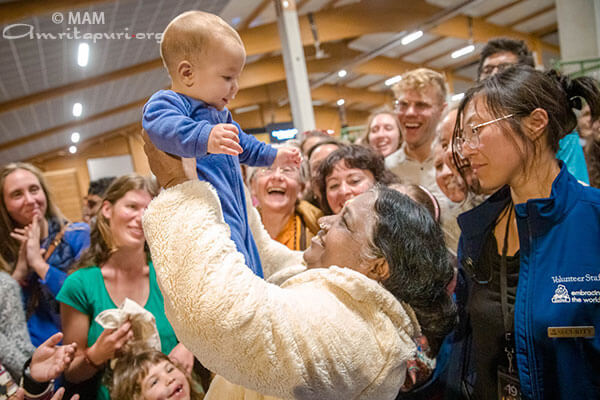 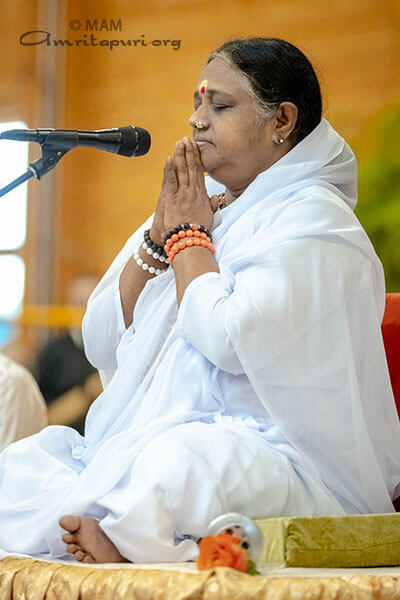 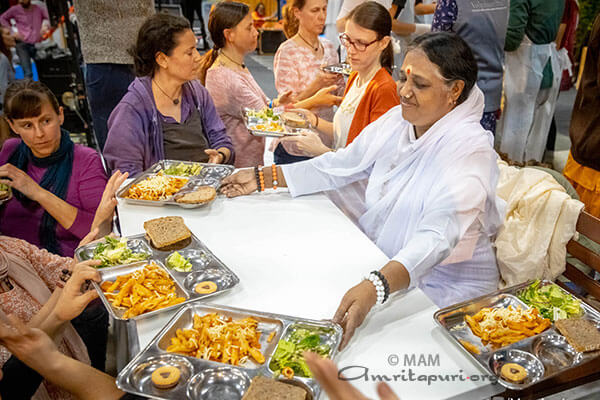