The tour group stopped in Kozhikode at the house of Chandrahasan, a devotee who had known Amma for over thirty years {news}. It was lunch time and Amma had just passed out prasad. She asked the devotees gathered there whether anyone had a question. A devotee raised their hand and Amma called on them. “How we can increase our devotion in each moment?” 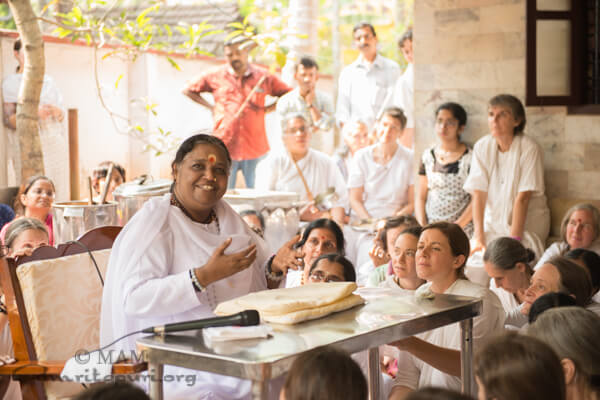 Amma answered:
“Devotion is dependent on the intensity of your desire for the goal. Intensity on the goal will bring vairagya (dispassion). Similarly, one must use viveka (discernment) constantly–neti neti1.”

Desire for the Goal
“You should have the yearning of a fish out of water. That yearning the fish has to get back into the water, our yearning for the goal should be like that. For the fish, the water alone is life. The fish is aware that every second in the land is taking it closer to death, and so it does not waste a moment. As long as the fish is out of the water, it will flail wildly to get back into the water. This is the type of yearning we should have for the goal.

Adding another exaple Amma said “Similarly, when one is hungry, he will ask for food. If he can’t get food, he will beg for money so he can buy food. If no one gives him money, then he will steal the food. You should develop that level of yearning.

Vairagya and Viveka
“We need to have the vairagya (dispassion) of a person who is seated before their favorite dish, but has seen a spider or a lizard on the ceiling dropping in to the plate. This person knowing this, they may not take the food for fear of becoming ill. This is the kind of dispassion we should have towards the world.

“When a student has an exam coming up, he will not go to a party or a movie, he will eat less the evening before so that he can get up early in the morning and study without being tired. He’ll be always focused on his studies. For his goal he is ready to sacrifice many things. Similarly, we should have an awareness of the goal and an intense yearning as well as dispassion.” 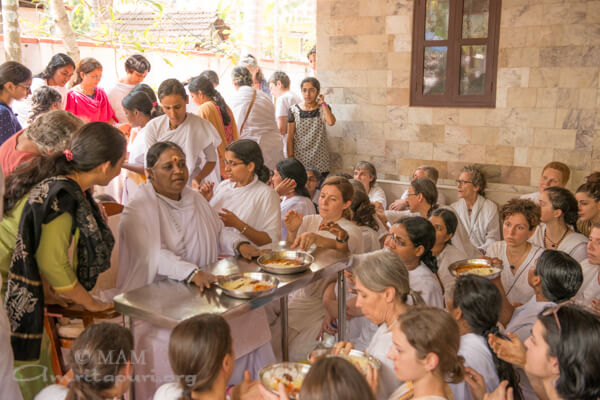 Examples from Amma’s Youth
“For Amma everything is divine. Creator and creation are not separate. Everything is one. Amma used to talk to everything as if it were a living being. To the pigeons, to the parrots, to the coconut trees, to the cows, to the goat, to the wind, to the ripples in the backwaters… When Amma would take a bath, She would share stories with the ripples and kiss them. When Amma would walk, if She had forgotten to chant a mantra, She would take two steps back and then proceed forward again chanting the mantra. When Amma would go underwater in the backwaters, She would think, ‘How many mantras can I chant while under the water?’ Then She would dip under, only coming up for a breath after chanting that many mantras.
“Amma had that kind of attitude. Seeing everything as Her own Self, this attitude came naturally. Though Amma was aware that everything was atman, She never felt that anything was insentient. She would even share Her feelings with Her pillow. Amma never felt that it was just a pillow, it was also divine, it was also conscious. For Amma nothing is insentient or inert. Everyone may not get this attitude. Getting this attitude is like winning the lottery. Though you may not have this attitude naturally, you should keep putting effort.”

Attitudes Towards God
“When you have a problem, don’t go and tell everyone around you, share them only with your ishta deva2.
“Small children come to Amma and tell Her that their father scolded them and their mother did this and that, their brother or sister got in a fight with them. They save their complaints for Amma. Like that, you should go to the puja room and share all your complaints and sorrows with the ishta deva. This is the attitude we should develop. Either this attitude or the attitude that everything is the Self.”

Then Amma discussed the various attitudes the devotees may adopt when they want to sit near Amma. Some may be intently focused on being as close to her as possible, some may take it as their fate to be wherever they are, some may see everything as Amma. These are all different attitudes the devotees might take.
“Even though God is within, in our current state, the mind is very far away from us. We don’t have the awareness that God is within, so this attitude is also a kind of discrimination to reach our own self.
“Even though we may have studied Vedanta, that bhava of discrimination may not be there. Amma doesn’t see that it is coming. When difficult situations come we get swayed away from that attitude, and so, we are not able to put into practice what we have learned. The essence and basis is Advaita3, all other practices are preparations to reach this state.” 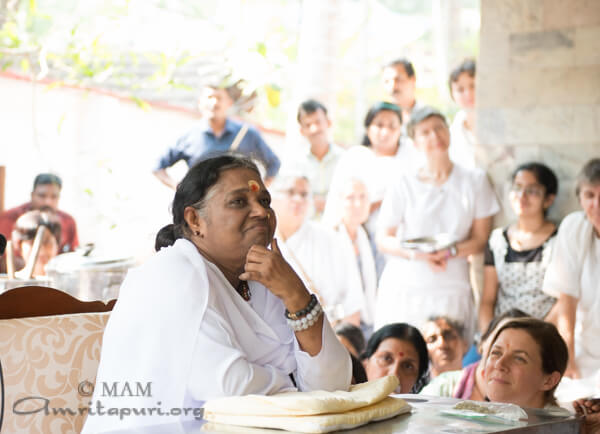 Remembrance of God in Times of Sorrow
“Queen Kunti prayed to the Lord that she should would be sorrowful all the time. She did so because she felt that she would remember the Lord more in sorrow than in prosperity. Amma feels that, in the light of the sun, you see all objects, but you never notice the sun. Contrarily, in the moonlight you see only the moon. It is the same in the darkness of sorrow, you see the Lord. In the light of the sun you see only material objects, but in the moonlight, the same objects are there, but one only sees the moon. Similarly, in the darkness of sorrow, you think only of the Supreme.”
The devotees sat quietly, immersed in contemplation of Amma’s words.
For each, there was a special message, for each, special instructions, for each, a phrase or sentiment that quenched their heart’s ever-parched desire for the water of Mother’s wisdom.
Even in the daylight, Amma shined as bright as the full moon in the cloudless expanse of the night sky.

[1]: “Neti, neti,” which can be translated as “not this, not this,” refers to a practice used by jnanis to discern the Atman (immutable self) through negation of all that is anatman (impermanent non-self). With neti, neti each object, thought, feeling, desire, like, dislike, etc. that comes before the mind is considered in terms of whether it is atman or anatman. Those which are anatman are negated, “not this” (i.e. not the self), strengthening one’s vairagya (dispassion) for the impermanent.