After dedicating the Ramayanam Darshanam (exhibition on Valmiki Ramayana) and the Bharatamata Sadanam (temple dedicated to Bharata) a reception was given to Amma where massive crowd was waiting to meet her at Vivekananda Kendra.{news} 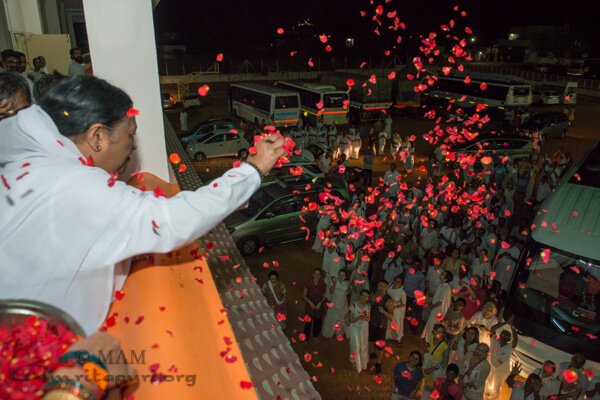 Amma was welcomed to the stage by the Vice president of Vivekanda Kendra Padmasree Nivedita Bhide. She was accompanied on the dais by Dr. Harshavardhan, Union Minister for Science and Technology; Pon Radhakrishnan, Minister of State for Road, Transport and Highways; O. Rajagopal, MLA and former Union Minister; P Parameshwaran, Director of Bharatiya Vichara Kendra and many others. 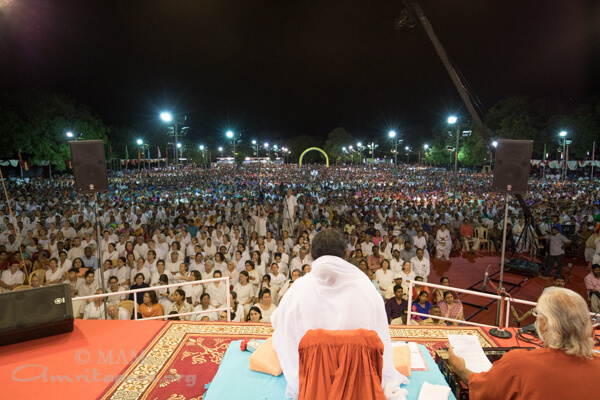 Addressing the huge gathering, Amma spoke on the deep significance of the new Bharatamata Temple, and the importance of India’s people remaining aware of and connected their nation’s ancient cultural heritage and values. She also remarked that the basis of both India’s national culture, as well as her spiritual heritage, is compassion: “We should not forget that, in order for us to truly feel national pride, even those at the bottom rung of society should be in a position to live a life of dignity. We should be willing to put in the effort to make that a reality. There is no religion or scripture greater than comforting the sorrowful, encouraging the weary, and offering a helping hand to the struggling.” {Read more of Amma’s address here}

Amma released a souvenir, a pictorial collection of the Ramayana Darshanam exhibition and Bharatamata Sadanam, commemorating the occasion, and handed over the first copy to Dr. Harshavardhan and Pon Radhakrishnan.

Amma also handed over the keys of 15 newly constructed houses in Kanya Kumari to the beneficiaries and saris to 545 members of our Amrita Sree self-help groups.

Sri Pon Radhakrishnan offered his congratulations for the successful completion of the new temple, and said on a personal note, “My good fortune of reaching this position in life is only due to Amma’s Grace. I request Amma to build a Brahmasthanam Temple here so that she will visit every year.” 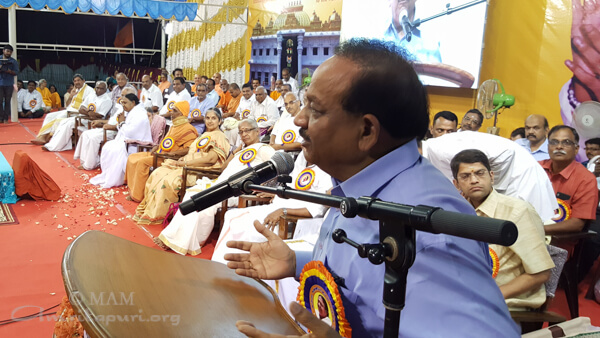 Dr. Harshvardhan, Minister of Science & Technology remarked: “I cannot describe the joy I feel on this day… If there is one soul in India, about whom we can say with certainty and with confidence that the blessings and affection of that soul are as powerful and divine as that of God, it is Amma. Today, I came for a routine function, never knowing that I was going to win the biggest lottery of my life, by getting Amma’s blessings!
“When the Prime Minister inaugurated his Swacch Bharat program, Amma was the first one to announce her support for the program, and donated Rs 100 crore. Today, she also participates in the national policy of ‘A house for every Indian by 2020’, by handing over the house keys to so many needy people here,” added Dr. Harshavarshan.

Dr. Lakshmi Kumari, President of Vedic Vision Foundation, said “We are thrice blessed today by the presence of Amma here in Kanyakumari. The Purana says that even Lord Anantha cannot describe the glory of a such person. If in India there is one person whose glory none of us cannot express in words, thoughts or deeds, that is our beloved mother.

“Amma is an embodiment of Gargi and Maitreyi, in knowledge she is one with Akshra Brahma, and in love she is universal, in her capacity unbounded capacity to love. Sometimes I feel very jealous of it. How she can love so many people and confer blessing them. We sit two minutes, we feel tired. That is because we have not identified with Brahman within.

“Let her presence give us a new clue how to become like her. We have to identify Atma within. Seeing the Self everywhere and seeing everything in the Self. We need that blessing this day, so that we get that Self-knowledge, to see the world beyond discrimination of religion, caste, sex and creed. That is the blessing we need from you on this auspicious occasion,” Dr. Kumari said in her vote of thanks.

Amrita Vidyalayam students presented different cultural programs as Amma gave darshan through the night. In spite of a light rain, people waited patiently throughout the night to get Amma’s darshan. Amma left the stage at 9:38 am, after meeting all those who waited to see her, having been onstage for nearly 15 hours.