After finishing the program in Trivandrum, the tour group drove to KayanaKumari where the next program was to be held. Upon their arrival Amma decided to serve prasad. Once all the food had been distributed, sitting on the veranda of Amrita Vidyalayam, she began to tell the group why she always insists on serving prasad. 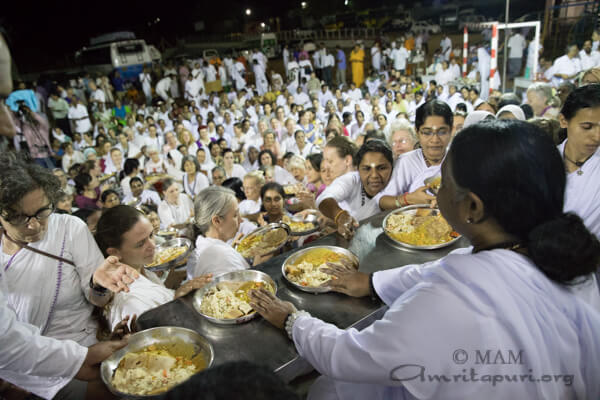 “On the other hand, with money, for instance, one can never say ‘enough’. A poor person will become rich when given enough money and then greedy when they are rich, and thus, never feel that they have enough. With food, people quickly become full and then say they want no more, that they’ve had enough.” 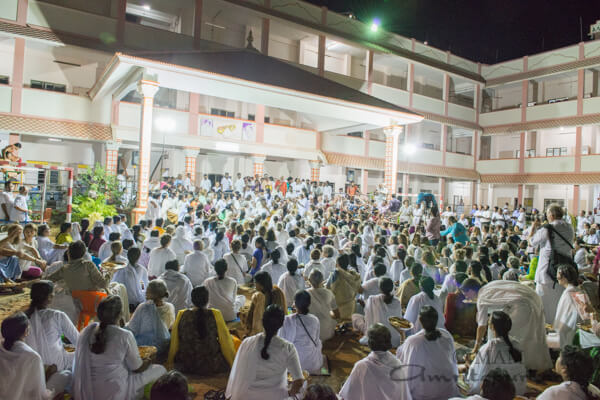 Collecting baby mangos and bilimbi
Then Amma began to tell a story from her childhood. She was recalling how, in her school days, Amma collected the baby mangos and bilimbi* when they fell from the trees for the children at the school that had no food to eat. Amma would cut them into pieces and mix them with salt and chilli. Amma would bring this mixture to school for the children who had nothing to eat. She would offer it to them and they would eat it and then take water from the well to drink.
Amma continued, recalling the traditions and culture of those days.

Shameful has become fashionable
“At that time, people used to fix torn clothes, stitching the tears and patching the holes. Back then it was painful to see someone wearing tattered clothes, but nowadays people buy a pair of brand new jeans for $25 and then pay another $100 to have holes and patches put in them because it is fashionable. Ironically, today people make holes in their clothes, exposing all the areas clothes are designed to cover. It is no longer shameful for people to walk around wearing torn clothes. In those days, it was shameful to walk around with clothes like that.”

Everyone sitting around Amma bust into laughter.

“Back then people would be starving from lack of food, but nowadays people starve themselves in order to lose a few kilos of fat. For those who didn’t have food and clothing, they felt ashamed if people found out they had torn clothes or couldn’t afford to eat, but nowadays people are proud of their tattered clothes or having not eaten.
“People want to look skinny and beautiful, whether they really are looking beautiful is another matter, but they think they are looking beautiful.” 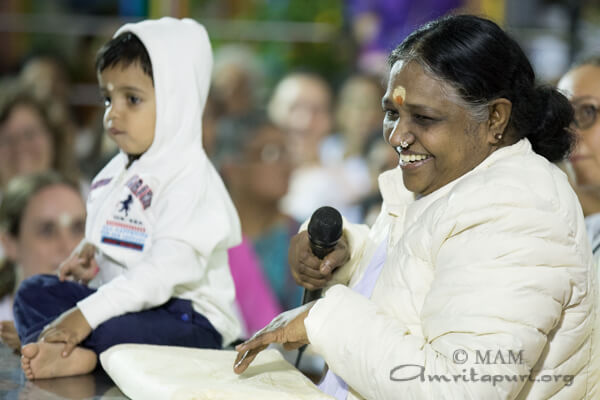 Attitude is everything
“It is all about the mental attitude. If they are not poor, it becomes a matter of pride to wear torn jeans. What used to be a matter of shame is now a matter of prestige. If someone has a hunchback, people might make fun of them, but if someone constructs a dress with a protrusion on the back, they will call it the latest fashion.”

Amma ended her talk with a simple piece of advice.
“The world is going in a very strange direction. We need to look into ourselves, not anywhere else. Look within.” 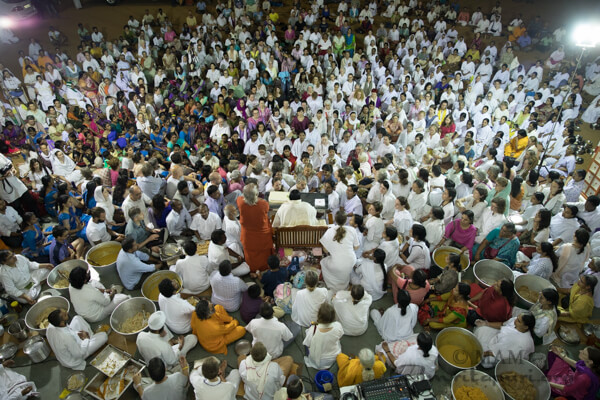 * Bilimbi is  the fruit of the tree  – the genus Averrhoa, family Oxalidaceae.  It is cylindrical and ellipsoid in shape, green in colour, tastes sour, crunchy and juicy, high in nutritional value, used as a spice in cooking in some of the seasonal dishes. Found in tropical climate, planted in the house gardens.