Amma’s previous visits to Paris metropolitan area were held at an arena in Cergy-Pointoise. This year, Amma’s program was in Paris itself, inside the Boulevard Peripherique. Her first program there, a Wednesday, was scheduled to begin at 11:00 am. But the lines of devotees waiting to spend a few moments in her arms began well before the sun rose, and for the following three days, the lines formed an unbroken stream of humanity who had heard Amma’s call, “Come quickly, my darling children, you who are the essence of Om.” 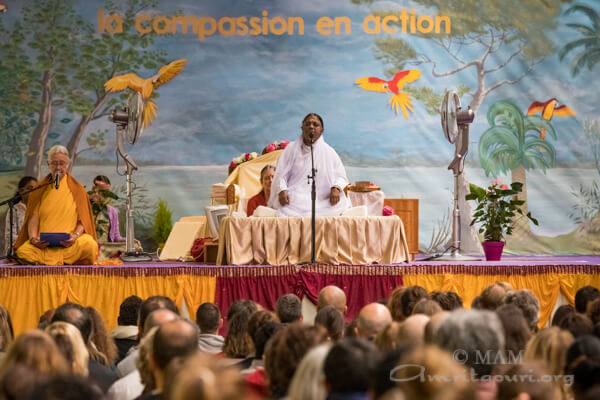 In fact, Amma’s 3-day program began the night before, when she arrived at the venue after an all-night Devi Bhava program in Winterthur. On arrival, Amma came to the program hall and served food to all the assembled volunteers who had been hard at work to ready the facility for the tens of thousands who would walk through its doors over the next 3 days. Over the prasad meal, one of the devotees asked Amma about the importance of forgiveness. Amma replied that forgiveness actually helps the one who forgives even more than the one who is forgiven. Without forgiveness, Amma said, we are stuck in the cycle of action and reaction. When we forgive, it sets us free. Amma gave some practical tips as to how to practice forgiveness in our lives, and went on to conclude, “Whether we laugh or cry, days will pass by. In that case, why not choose to laugh?”

The European Union’s Director General of Education and Culture, Martine Reicherts, also came to see Amma during her 3-day programme in Paris.

There were many uplifting musical and dance performances offered to Amma and the assembled crowd over the three days – a highlight was an African drumming troupe whose performance on Devi Bhava got a huge portion of the crowd up on their feet and losing themselves in blissful dance as Amma, in Devi Bhava, beamed at her children and continued to welcome them one by one into her arms. 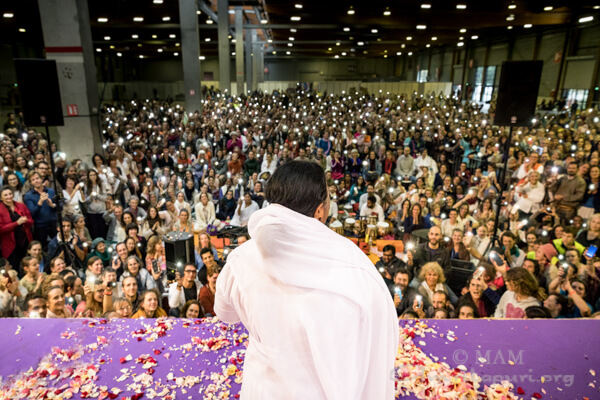 Amma’s Devi Bhava darshan stretched well into the fourth day, which happened to be Diwali. After the curtains opened and Amma emerged to say farewell to the thousands of devotees still gathered there, one by one, they turned on their mobile phone lights and held them up, as if each of them was remembering Amma’s words: “Try to make others happy, and don’t despair over all the evil in the world. Instead of cursing the dark, let us each light one small lamp.” It was a beautiful and spontaneous Diwali celebration and a joyous, touching and hopeful end to Amma’s time in Paris with her children there.