Amma held programs at her center in Germany, the M.A. Center at Hof Herenberg in Brombachtal, for the second year running. Built on a horse ranch in the rolling hills of central Germany, the naturally tranquil atmosphere provides the perfect foundation for a retreat-like setting for an Amma program – devotees come from all over Europe and abroad to spend a few days in her presence. A warm, vibrant, community feeling pervades the air and conversations and interactions everywhere as devotees recognize each other and stop to exchange a few kind words. The program at Hof Herenberg calls to mind Amma’s ashram in San Ramon, California, along with the feeling at M.A. Center Chicago. 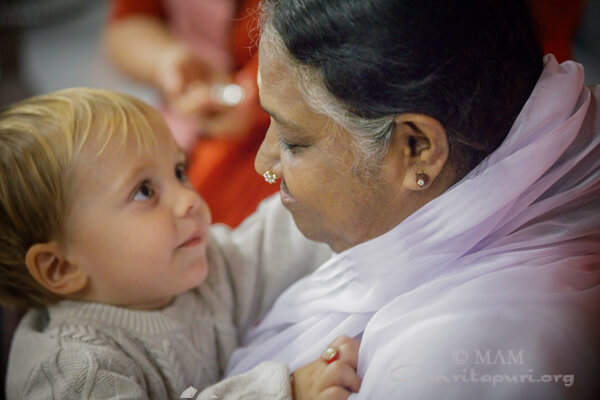 Amma was warmly welcomed to the area by Anni Resch, Deputy Head of District, Responsible for Social Affairs and Voluntary Work, as well as the Mayor of Brombachtal Mr. Willie Kredel and Mr. Stefan Kelbert, Mayor of the nearby city of Michelstadt.

Embracing the World and AYUDH have been very active with service projects in Michelstadt, including providing integrational activities for unaccompanied minor refugees, the renovation of the local Heilig-Kreuz-Park, visits to the local care home, setting up a permaculture garden, facilitating sustainability workshops at the Protestant Church Youth Days, and initiating the ‘RespAct’ project to combat cyberbullying at the Theodor Litt School.

In his remarks, Mayor Kredel said: “In a world shaken by terror, we are at peace here in Brombachtal. Peace is a word that consists of very few letters. It is easy to write, it is easy to pronounce, and it is also very easy to live according to it… I am convinced that if we drove out the five major enemies of peace – pride, greed, ambition, envy and anger – we would have eternal peace on earth. With people like Amma, with this level of social involvement, you don’t have to say much. I bow down to her with admiration. She is a wonderful woman.”

Ms. Resch reflected: “”Dear Amma, you have moved the world with your message of love and compassion, and you are still moving it. You speak of different religions, and you say that if everybody remembers the foundation of their own religion, the same values of love, compassion, humanity, hope – to name a few – will be found. If so many people come together everywhere, with Amma’s ideas, then peace will be possible for us to achieve and sustain. Amma, you move something in people, so they can spread an unbelievable energy, warmth and joy through your love. Thank you for being there, and thank you also for the many projects here in the Odenwald region. Thank you.” 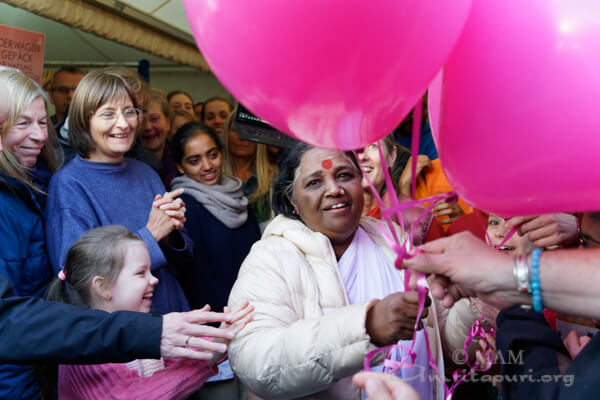 After Devi Bhava concluded on the morning of November 2nd, devotees waited outside the temple hall, near the open door of the vehicle that would carry her to Barcelona. In their hands, they held heart-shaped balloons. Before Amma came, there was some friendly jostling and debate as to whose balloon Amma would take into her hand and let sail up into the sky. When Amma finally arrived at the door of the hall, she surprised everyone by gathering up each and every balloon into her hand, calling to mind the stories of Krishna and the gopis – though each would anxiously angle for his attention and love, in the end he found a way to make them all happy and feel that they were his favorite. Gathering the balloons to her heart, Amma held them close and let them all sail up into the clear blue sky. The three days in Hof Herenberg with Amma were uplifting and heartwarming for all who had the good fortune to be there – thus watching these hearts rise up into the sky, ever higher and higher, was a fitting end to Amma’s time there and a precious memory that will live in the hearts of Amma’s children forever. 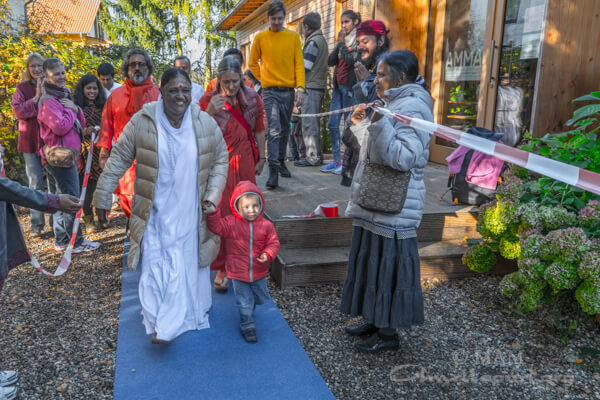 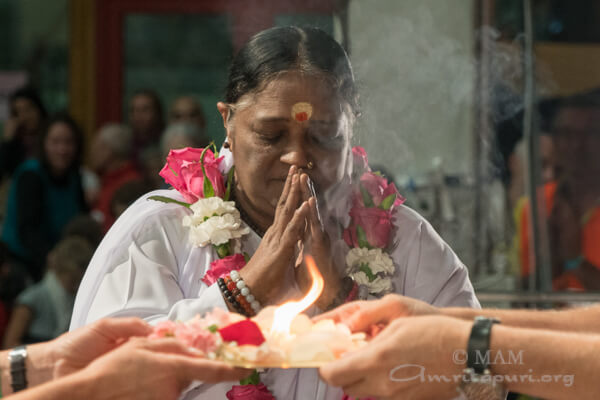 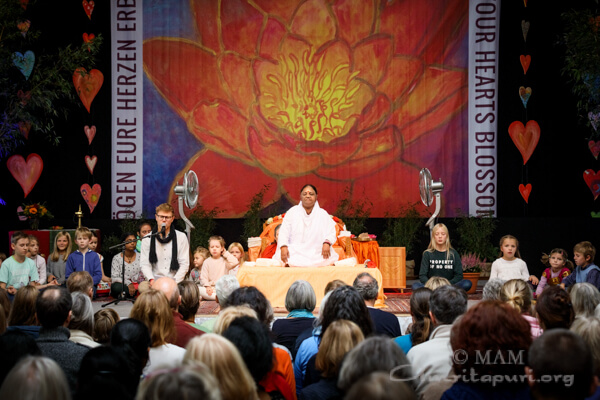 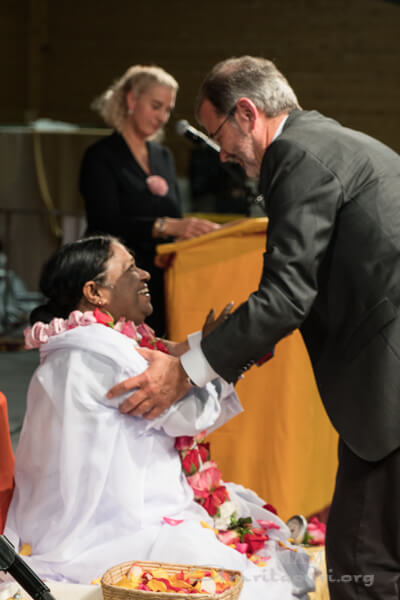 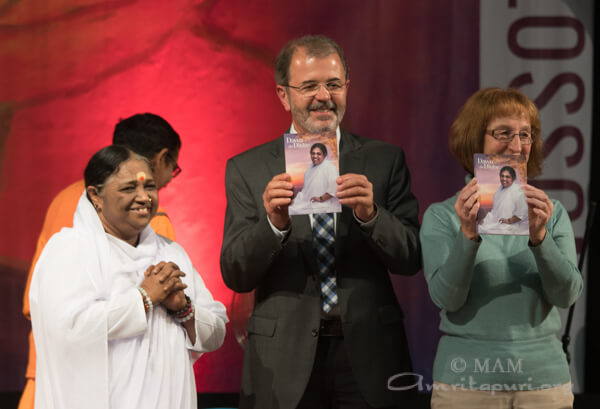 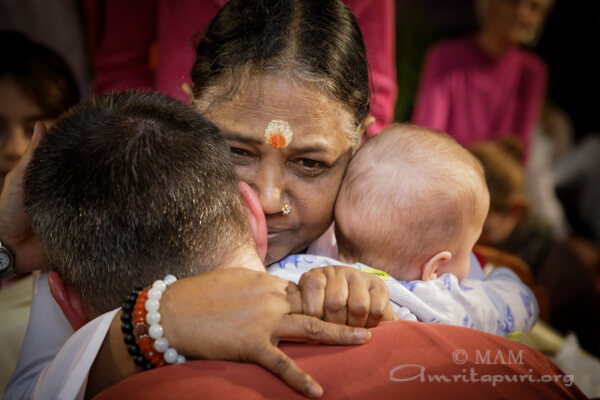 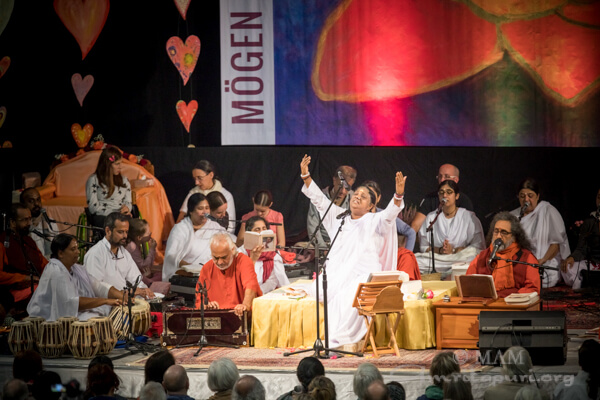 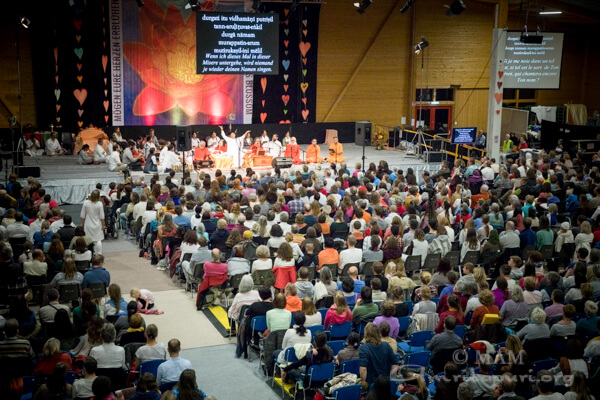 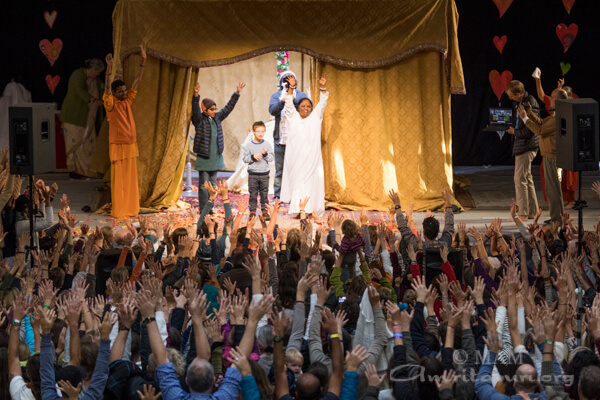 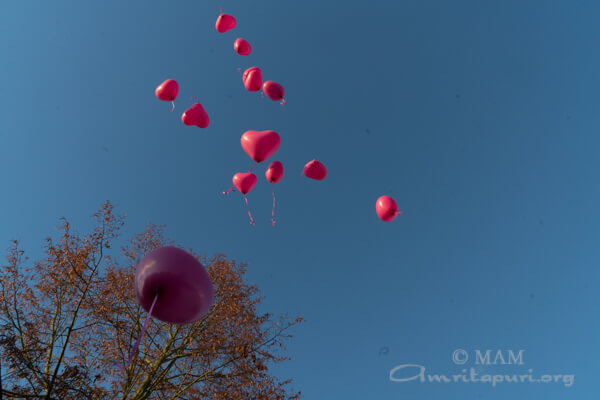