For each of the 10 days of the annual Onam festival, ashram residents as well as students took turns making beautiful big pookkalams (floral designs) at the foot of the steps to Amma’s room. Each day when Amma came out for darshan, she would stand there for some time, bow to the pookkalam and comment about the beauty of the work – for it was not possible to say which was more beautiful. 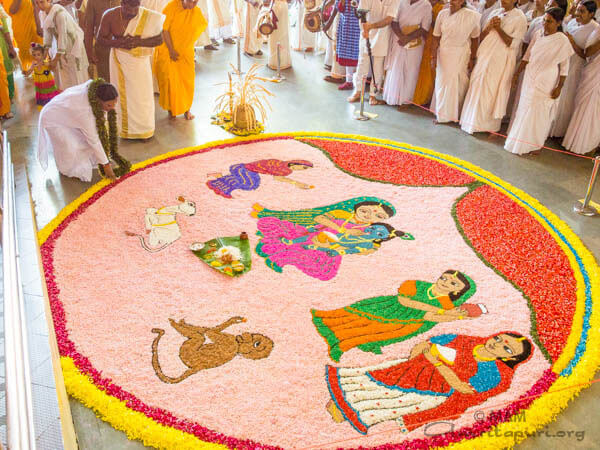 On the final day of the Onam festival, Amma was welcomed by Panchavadyam – traditional Kerala drums – to the stage. After Amma gave her Onam message {news}, she sang two bhajans (Bandalo Bandlo and Radhe Govinda Gopi Gopala), and asked everyone to clap and dance along with her. At the end Amma danced to the tune of Baduga music. 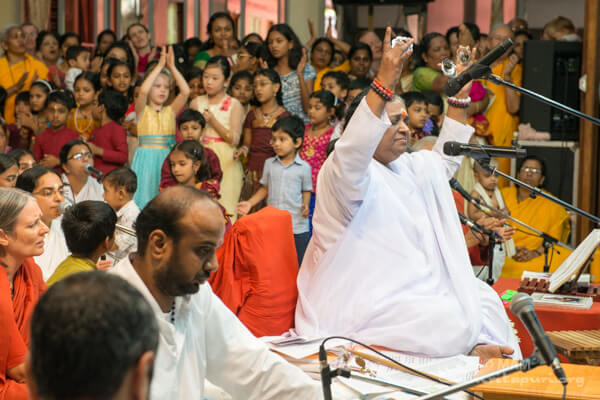 After giving darshan for a short time, she started giving OnaSadya – the traditional Onam feast – to all those present. Last but certainly not least to receive her OnaSadya was Lakshmi–the ashram elephant, who was fed by Amma herself. Amma gave Lakshmi giant rice balls, payasam, pappadam, and avil one by one, as well as banana clusters. Then Lakshmi played her favourite game – she was given buckets of water, from which she sprayed water on all those assembled, giving those nearby quite a bath.

That evening, Amma sang bhajans, transporting all into a realm beyond. 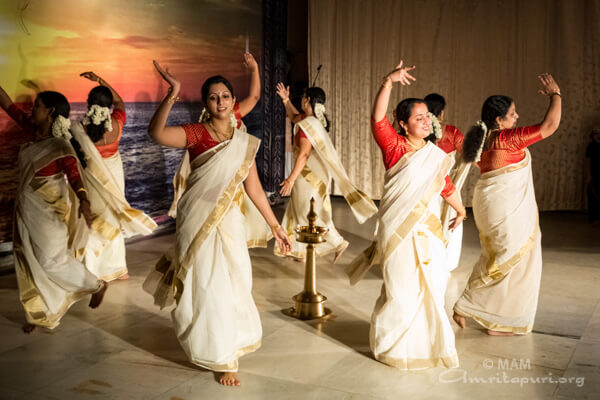 After dinner, ashramites staged a number of performances, including dances and dramas, for the delight of all. Amma sat for all the performances along with the rest of the ashram residents and visitors. By midnight, Amma sang “Love is the way” in English and the crescendo – “Aya he sara jaha yaham”. With prayers for peace of the whole world, this year’s Onam celebrations came to an end.
-Kannadi