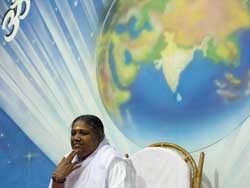 Advaita it is such a simple word. It means “not two.” But within this simple conjunction is cradled the entirety of spirituality. It is the reminder that things are not diverse, as they seem, but One.
Man and Nature? Not two. Creator and Creation? Not two. Inside and outside? Not two.

God and devotee? Not two. Guru and disciple? Not two. Atman and jivatman? Not two. You and I? Not two.

It is this philosophy that informs all the service activities of Amma’s Ashram, for as Amma says in almost all Her satsangs: “When you accidentally poke yourself in the eye, do you punish your finger? No, you soothe both the finger and the eye because you know them both to be you.”

This Friday, Amma was talking to all the ashramites about how imperative it is for them to go beyond their identification with their ego—their sense of being a limited mind, body and intellect existing separate from others. “We need to see ourselves in others and act accordingly,” Amma said.

As an example, Amma cited the nine temporary shelters the Ashram has constructed for tsunami victims in Srayikkad.

“The brahmacharis worked on them all day and night,” Amma said. “Amma would often call the brahmachari in charge and ask him how the work was going, and no matter what hour She would call, he would be there working—midnight, two a.m., four a.m.”

Amma said, at one point She told him to make sure and get some sleep. But he said he couldn’t, as he knew that every hour the shelters remained incomplete was another hour the evacuees had no place to rest their heads.

“Because he was so identified with the suffering of others, he was able to transcend his physical and bodily needs,” Amma said.

Amma then wondered aloud if this was the case with the paid workers? “No,” She answered Herself. “They work only eight hours a day, stopping three times to eat and two more to drink tea.”

Perhaps this is why the Ashram completed its first five shelters on January 13th and its ninth on the 25th—whereas the government has yet to finish one.

“A mother never tires of taking care of her children because she considers them here own,” Amma concluded.

She then called all the visiting devotees to come quickly for darshan, as She had much work to do and meetings to attend regarding the relief work.