Among the people coming for Amma’s darshan in Amritapuri have been a number from Sri Lanka, the tiny island country a stone’s throw from India’s southern tip where more than 30,000 people were killed by the tsunami. They’ve been begging Amma to come to them, to bless the half a million people who have been displaced there. 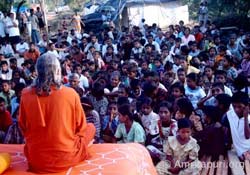 The Sri Lankans who have come to Amma tell Her of a country without hope, where, rather than face the seemingly impossible odds, many are opting for suicide. Sri. K.N. Devananda, a minister in Sri Lanka holding several offices—including that of Cooperative Development—sent Amma an official invitation (news), requesting Her to “bless Sri Lankans of all faiths and races and to bring peace and prosperity in their lives.” The minister was frank: “The devastation is unparalleled in our known history. The victims need spiritual healing, solace, succour and blessing.”

Amma promised to go in the near future [16 February] and for the time being sent Swami Ramakrishnananda, telling him to console the distraught as well as to assess the potential for the Ashram to do relief work there. Accompanied by four brahmacharis, Swami Ramakrishnananda left for the island country on 21 January.

The team visited villages in some of the worst hit districts in Sri Lanka: Batticaloa and Ampara on the eastern coast, and Galle in the south.

In Batticaloa, they first visited Tiruchendur. This is the area where the water came as high as the coconut trees and left virtually nothing standing. Some Singhalese volunteers who were helping with relief work in the area showed them an electrical tower, by climbing which 60 villagers had been able to survive the flooding. 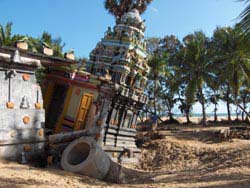 Amma’s disciples next went to Akkaraipattu in the Ampara District. There, they met with Minister K.N. Devananda’s offices, as well as Rama, a Malaysian HSS (Hindu Seva Sangh) coordinator, conducting relief work. Swami Ramakrishnananda told the coordinator that it was Amma’s desire to help both the Tamils and the Singhalese people of Sri Lanka.

While in Ampara, the team visited the Kannagi Ammam Temple in the Tirukovil. In this area around 700 people died and 23,000 families were affected. There, they met a group of HSS volunteers who were between the ages of 10 and 20. Many of them had been directly affected by the tsunami.

The HSS volunteers would go to the relief camps as early as 7:00 in the morning and talk with the villagers, listening to their sad stories. They would also distribute free clothes and food as well as sing bhajans with the children. Many days they would not take lunch until 5:00 in the evening, continuing to work until eight or nine at night.

“On the way to the relief camp, we drove through many deserted areas that looked as if once it had been home to a very good town,” says one of the brahmacharis. “All the houses were destroyed and only parts remained here and there. We heard that some women died because their clothes or hair got caught in thorny bushes while they were running for lives, and they drowned in the rising waters.”

At the first camp, Komari 1, they spoke to one woman who told them that many of the men in her village had drowned when they went back to collect valuables after the water from the first wave began to recede. At the second camp they visited, Komari 2, the brahmacharis distributed notebooks, pencils, erasers and scales to all the children, and taught them to sing bhajans as well “Amba Bhavani Jaya Jagadambe.”

The next day Swami Ramakrishnananda conducted a programme at Komari 2, including satsang, bhajan and meditation. At the request of local volunteers Swami installed a murti of Lord Ganesha on the top of a nearby hill.

The next day after a programme at the Gayatri camp in Ampara, Amma’s disciples spoke with the people individually. When they asked one lady from a fishing village who was dressed in a very old sari if the government was supplying her with everything she needed, she displayed a powerful faith: “Why should we get angry with others? It is He who prompts people to give to others. If He doesn’t tell them, then we will not get anything. The first time the water came, it only rose about three feet. He gave us a chance to escape. Some people went back after that first wave subsided to get their money and valuables and then died when the second, bigger wave rolled in. Now all the rich and poor are living here without any difference in status. He is the one who is giving and He is the one who is taking. It is because of His grace that others give.” 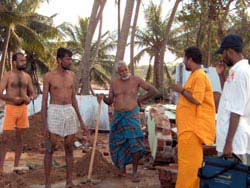 The next day there was a programme at the Music & Dance College in Payarakoil, Batticaloa, which was attended by some 400 people. After the programme one villager came to them in tears. “Having lost everything in the tsunami, I was thinking why should I live in this world and often felt that I should also die,” she confessed. “But after hearing Swamiji’s talk, I feel some kind of peace within me. I don’t know where I am getting this sense of peace. It’s a total change. I don’t have any fear anymore. I want to live.”

The team then drove back south to Colombo, where they met with Sri. K.N. Devananda, the minister who’d invited Amma to Sri Lanka. They also took the opportunity to visit a Singhalese relief camps in the district of Galle.

Now, Amma has announced (news) she is going Sri Lanka on 16 February. The prayers of her Singhalese and Tamil children there are clearly pulling Her to the island’s shores.