In the wake of the Mata Amritanandamayi Math’s Global CEO Summit, which was held during Amma’s 50th birthday celebrations in Cochin, there has been a lot of activity between the Math and India’s advancers of business, science and information technology. 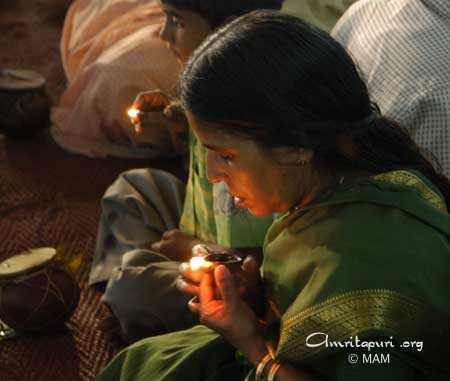 Recent months have seen collaborations between Amrita Vishwa Vidyapeetham’s Research Lab and Mumbai’s Bhaba Atomic Research Centre (BARC), as well as between AIMS and the Indian Space Research Organisation (ISRO). With Amma’s visit to Bangalore—one of India’s leading IT centres—more than 20 top entrepreneurs came to the Ashram to have Amma’s darshan and to learn more about the Math and its activities.

As of this posting, Amma’s Bangalore Brahmasthanam Festival is still going. More than 4,500 people participated in this evening’s Saturn Puja led by Amma, and some 26,000 people have taken tokens for Amma’s darshan tonight.

Tomorrow, Amma continues on to Davanagere, Karnataka for a one-night public programme.