Davanagere was the site of the fifth stop on Amma’s North India Tour. The program was held cradled in the E-shaped Amrita Vidyalayam. Hours before the program began, devotees began queuing up outside the school grounds in order to get their darshan tokens. Amma has been regularly going to the city since 1998, but last year the city was not a part of Amma’s tour. 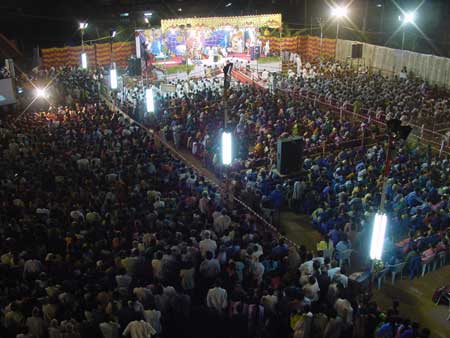 When Amma came down from Her room, She was cheered enthusiastically by the crowd. Those close enough to Her path strained to touch one of Amma’s hands as She walked past. For Her part, Amma similarly reached out—it’s not only the child that misses the mother.

On stage, Amma’s pada puja was performed by Karnataka’s former Minister of Education, the Honourable Smt. Nagamma Keshava Murthi, and her husband, leading industrialist Shri. Keshava Murthi. Amma was also welcomed by the president of the local ashram, former Member of Parliament Shri. Shamannur Sankarappa, and his son, Karnataka’s Minister for Sports & Youth Affairs. From the dais, Shri. K. Chidananda Gowda, vice chancellor of Kuvempu University, spoke about Amma and on spirituality and education in general.

At the start of Amma’s darshan, children from the Amrita Vidyalayam, Davenagere performed an hour-long play—complete with song and dance—depicting various stories of Lord Krishna from the Srimad Bhagavatam. 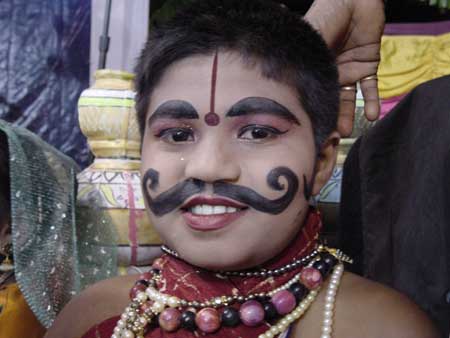 Different classes acted out different stories. A very young Krishna was seen charming the gopis with his dance and flute. A little older Krishna was seen fighting the wicked king, Kamsa . Then, upon the conclusion of the lovely performance, all the children had darshan in the arms of Amma, who—with great delight—fed laddhus to all the Krishnas, gopis and demons!

Darshan went on through the night and ended at 6:30 in the morning.