On August 18, 2008, the Kosi River broke through a man-made embankment in Nepal. The flooding was massive and engulfed half the neighbouring state of Bihar in India. The prime minister declared it a state of national calamity. {view photos of the flood here}  According to the World Health Organization, 3.3 million people in 1,850 villages were affected, with one million rendered homeless. Crops were devastated, and there was no drinking water. In the worst-affected regions, only treetops were visible above the waterline. 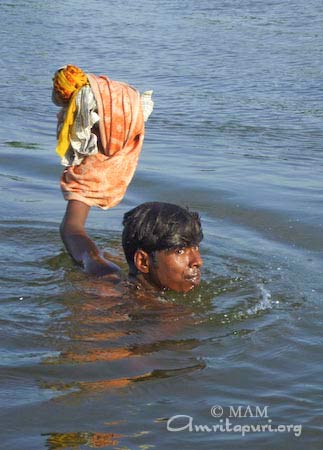 On September 10, 2008, MAM began its Rs. 2 crore [$465,000 US] flood-relief program{news}. AIMS Hospital dispatched teams of specialists and paramedics who treated more than 400 patients daily, sometimes seeing to more than 500. Not only did the doctors treat wounds, respiratory problems like pneumonia and fungal growths, they also delivered several babies. {view photos of camp life} 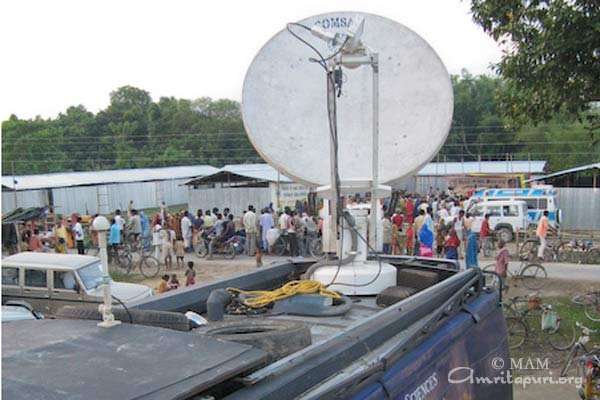 Two state–of-the art ambulances were sent to the area via rail from Kochi—a total of distance of almost 2,500 km. One of the ambulances was AIMS Hospital’s Mobile Telemedicine Unit, which includes X-ray facility, ECG scanner, pathology-lab-work facility, specialty cardiac services and a telemedicine satellite link with AIMS Hospital.{view photos of tele-medicine service here}

A temporary hospital was maintained in Supaul for one month. The medical team remained in Bihar for more than two months, treating 50,000 people through 100 medical camps. Rs. 30 lakh [$70,000 US] in medicine was provided, as well as food, clothing and other necessities.{view photos of medical service here}

Monastic disciples led the teams. The first base camp was established in Purnia. Three temporary shelters for the homeless were quickly constructed in Bhawanipur. A second camp with four shelters was established in Laharniya, Supaul District. The shelters in Purnia were completed on 16th September, and those in Supaul on 11th October. In total, 1,500 flood victims were housed in MAM shelters. Kitchens and toilets were also provided.
{view photos of food and clothing here} 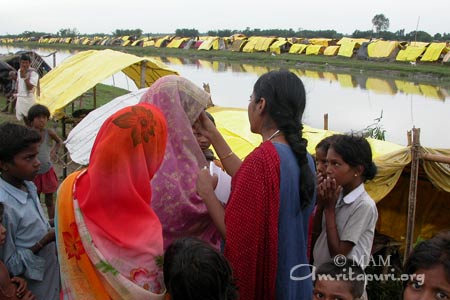 At one point, when construction supplies were delayed, brahmacharis and MAM volunteers went to a nearby bamboo forest and fell, loaded and transported bamboo poles themselves. Having witnessed their dedicated actions, a journalist wrote in the next morning’s paper, “They do not depend on the facilities available to them. They get their work done by sheer will power.”{view photos of educational support here}

Bihar’s Minister for Labour, Avdesh Narain Singh, expressing his gratitude to MAM, said, “The people of MAM are working day and night to serve the flood victims. In fact, I wonder if they are even sleeping at night! We are very thankful to MAM for accepting our appeal and rushing to help us in this time of need.”

After three months and more the government has started on the second phase of the rehabilitation project – taking census of losses suffered by individual farmers, so that compensation can be granted under different heads. The waters have receded in most places, a majority of the people have returned to their villages, and are now immersed in efforts to rebuild their lives.
{view photos of life after 3 months}