Currently 50 percent of Bihar is underwater. The UN has stated that at least one million people have been rendered homeless; others say the figure is as high as five million. The death toll is currently around 75, but medical experts fear epidemics due to contaminated water. Cases of Typhoid, Malaria and Cholera have been reported. The Prime Minister has declared it a “national calamity.” 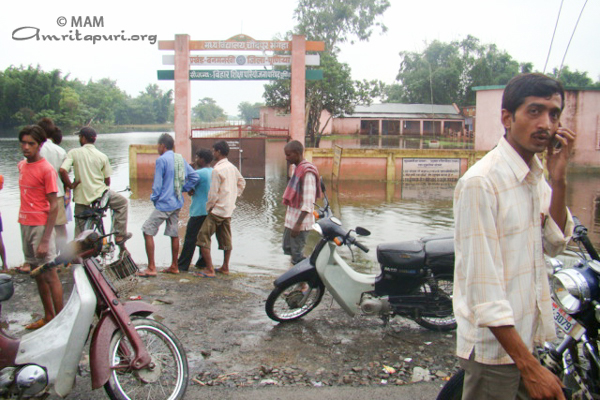 According to the World Health Organization, 1,850 villages, inhabited by 3.3 million people, have been flooded

The flooding began on August 18, when the Kosi River broke free of a man made embankment in neighboring Nepal.

According to the World Health Organization, 1,850 villages, inhabited by 3.3 million people, have been flooded. More than 600,000 people have been evacuated so far, but as many as hundreds of thousands still remain on rooftops or isolated high ground. Bihar’s Ministry of Agriculture has reported that crop damage is said to be at 1.5 billion rupees ($36 million U.S.) and rising. In the worst-hit areas, like Saharsa, only tree-tops are visible above the waterline. 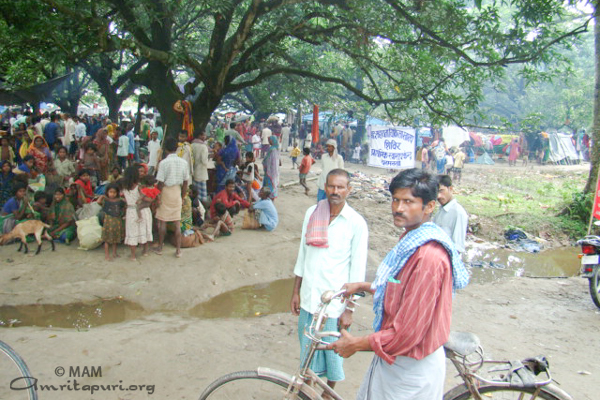 Hundreds of thousands have nothing but the clothes they are wearing—no food to eat and no means to cook it even if they did. Water is everywhere, but none is potable.

Amma has sent several teams comprising brahmacharis, brahmacharinis, doctors and nurses to the region. AIMS Hospital’s Mobile Medical Unit {news} and an ambulance will be reaching the region soon. The Mobile Medical Unit is as large as a city bus and contains facilities for X-ray and ECG as well as a pathology lab which can connect via satellite to Amrita Hospital. A lot of medicine is also being procured for the treatment.

The Ashram’s flood-relief headquarters is being established in the Purnia District. The current plan is to begin by constructing 20 temporary shelters one of which will serve as a temporary hospital.