Amma’s programme here was a festival not only in name but in spirit. For two full days, the grounds were filled to overflowing with relaxed, smiling faces. An atmosphere of peace and good cheer pervaded as students and staff of Amrita University and AIMS Hospital worked side by side with local volunteers to serve the throngs of devotees and curious onlookers who attended the event. 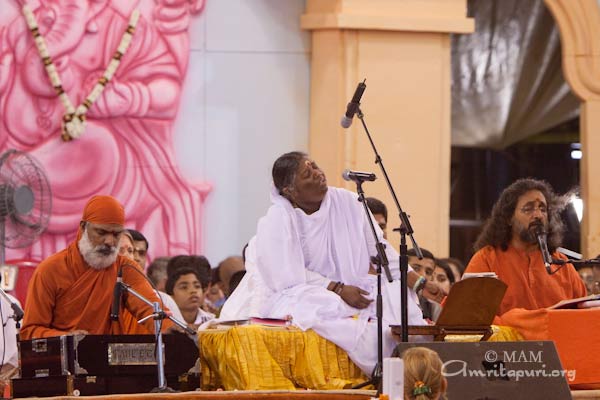 In his speech, Justice P.R. Raman reflected on the importance of Amma’s focus and message in today’s world. “Spirituality is the basis of the greatness of a human being. We must have values in our life. Whatever be our field of action, value-based life is what is important.” Justice. K. Padmanabhan added, “Amma’s compassion and love is the catalyst for great and positive changes taking place in the world today. If we translate Amma’s teachings into our life, we can attain Realization.”

Shri. Sashi Tarur shared his insights about what in fact draws people to Amma from all over the world and from all walks of life. “Not just here but in a thousand places across the world the name of Amma is honoured and respected. Not because of any ideology, not because of any religious faith, not because of any cult but quite simply because of the power of love. We sit before her to gain from her  the strength that comes from purity and simplicity of her smile and her hug.  Through that, we find within ourselves the strength to rise above all the limitations of our daily lives to something higher than ourselves, something purer than the rest of the world offers. That is where her power lies and it is greater than the power of a hundred kings, of a hundred prime ministers, of a hundred presidents. The simple power of love is the power of Amma and like all of you, I too bow tonight before her strength, her simplicity, and her love.”

The speeches were followed by an expansion of both the Vidyamritam and Amrita Sree projects. Over 100 children received scholarships to cover their educational expenses under Amma’s Vidyamritam project. The scholarships were presented by Vice-Admiral Damle and Dr. Krishnadas Nair.

Both days of programmes saw a litany of talented and captivating performances by students of both Amma’s Amrita Vidyalayam school and Amrita University Kochi Campus.

On the second evening of the programmes, Amma personally led the devotees through the Sani Puja, along with satsang, bhajan, and darshan for one and all.