After the Indian Ocean Tsunami of 2004, several women from the villages surrounding Amritapuri came to Amma telling of a peculiar and tragic plight. Not only had they lost their children in the disaster, they were also unable to have more, as they had long back opted to undergo tubal ligation as a form of birth control. Moved by their situation, Amma sponsored tubal-ligation reversal surgeries for anyone interested {news}. 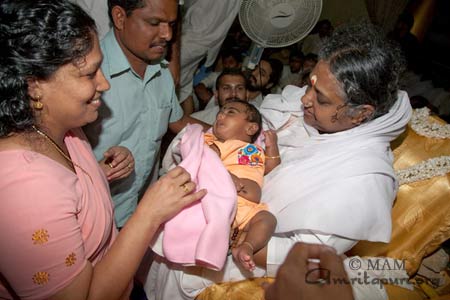 In the end, six women underwent the rare procedure. First baby was born in Sep 2006 {news}. Today the final couple—Appu and Luna of Parayakkadavu—brought their new baby for Amma’s darshan. The baby was just 11 weeks old. He was born one month premature, but was healthy and happy when placed today for the first time in Amma’s arms. Amma named him Krishnanunni.

Speaking with ashram residents, Luna said, “I feel somewhat assuaged. We lost two. At least we got one back.”