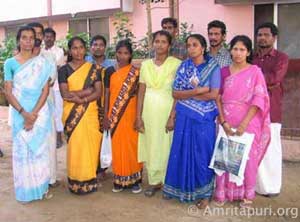 In the midst of such loss and tragedy, it is hard to say who has suffered the most. Out of all those affected by the tsunami, everyone’s heart goes out to the mothers that lost their children.

Many of the mothers who lost their children had previously undergone tubectomy to prevent them from having more children. So when their only children perished in the tsunami, many of these women lost hope and their desire to live.

When Amma came to know of their pain and suffering due to their loss, she offered them the opportunity to undergo a recanilization procedure at AIMS to reverse the effects of the earlier sterilization surgery.

Seven ladies expressed their willingness to undergo the procedure, to give them a chance to become mothers again.

“It was Amma who suggested the idea of the reverse operation as we were all very shattered by the tragedy. And our husbands and families also agreed,” says Lini who lost her sons.”

Sarala Sreedhar, a gynaecologist from AIMS noted that “only a few people opt for this surgery as it is very rare to lose both children. We can only say the success rate is 20 to 30 percent. And the success depends on how the tubectomy was done. There are chances for complications also.”

Despite the risks involved, all of the ladies have faith that because Amma is providing them this opportunity, everything will be successful.  Amma has given them hope where they had none.

“We have trust in Amma and the doctors. Everything will be all right,” says Adarsha, who lost her two daughters Sreelakshmi and Sreekkutty.