Blog - Latest News
You are here: Home / Messages of Amma / May the Christ take birth in your heart

Christmas Eve and Christmas Day both fell on darshan days in Amritapuri, and Amma was still giving darshan when the midnight hour struck on the 25th. While Amma continued to embrace her children, she had Swami Amritaswarupananda read out a message she had prepared.

In Amma’s message she said that if we look back on the teachings of all mahatmas—be they Christ, Krishna or Buddha—we will see that their main teachings were love and faith. “All the mahatmas have stressed these two things,” Amma said. “The rest is commentary.”

Amma went on to explain the significance of Christ both referring to himself as “the son of man” as well as “the son of God.” She said that a devotee with love and faith would not see these two statements as a contradiction, but instead would understand that Christ meant he was both the body, which exists in time, and the Atma, which is beyond time. “He meant that he was both a human being, as well as God,” Amma said. “He meant ‘I am this [the world] and I am that [consciousness].'”

“On Christmas Day, Christian children exchange gifts and kind words and wish one another Merry Christmas. This really reflects a sense of brotherhood. But amidst our celebrations, we should also remember the life and teachings of Christ. Christmas is also a day for taking a vow to put Christ’s teachings into action. May the Christ child take birth in the hearts of all my children. May our lives be full of love and the spirit of sacrifice. May my children become examples for others to emulate” Amma concluded.

Before Amma’s message, there were Christmas carols in German, Russian, Spanish and Finnish languages by the devotees from the west. There were also traditional Flamenco and Opera dances, which added spirit to the celebrations of Christmas in Amritapuri. 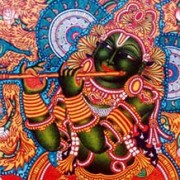 The life of Sri Krishna 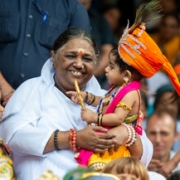 When the impurities are removed, our Bhakti will become mature 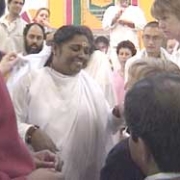 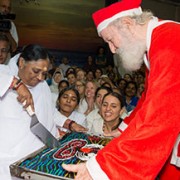 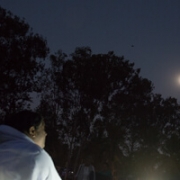 Onam at their home

We should feel grateful for the cow