Today at 12:16 pm, a special baby girl was born at AIMS Hospital in Cochin. The baby’s mother, Priya, was one of six women from Alappad Panchayat who had undergone fallopian-tube-recanalisation surgery under the sponsorship of Mata Amritanandamayi Math. 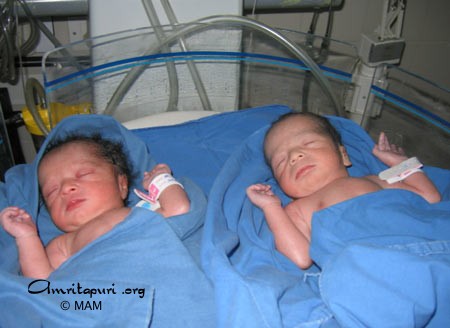 Priya Puthenparambil from Azhikkal, had previously undergone fallopian-tube ligation as a form of permanent contraception. As such, when her and her husband, Baby, lost their two children —Kiran and Kinkini— in the 2004 tsunami, they found themselves not only childless but also unable to conceive. When Amma learned of their situation, she offered them—and other couples—the opportunity to have their contraceptive surgeries reversed.
baby of priya

Priya had her recanalisation surgery at AIMS on 9 March 2005 at the hands of Dr. Sarala Sridhar. Her daughter, who was delivered via caesarean section, weighed three kilos at birth. According to AIMS officials Priya and her child are fine and are resting in the post-operative ward.

“It is all Amma’s grace. I am only an instrument,” said Dr. Sarala Sridhar upon completion of the delivery.

Upon hearing the news of the successful delivery, Amma said, “It happened because of grace.”