In the wake of the devastating earthquake in Nepal the Mata Amritanandamayi Math was also there to come forward with an offer to help. Amma immediately sent representatives to Nepal to assess the situation and help in whatever way possible. The Math was engaged in providing basic provisions – Rice, Dal, Clothing, Blankets, etc. Seeing that the devastation had made many in the villages homeless, the Math was engaged in distribution of tin sheets for roofing – with an aim to providing temporary shelter, which could later be used as part of their permanent housing too. 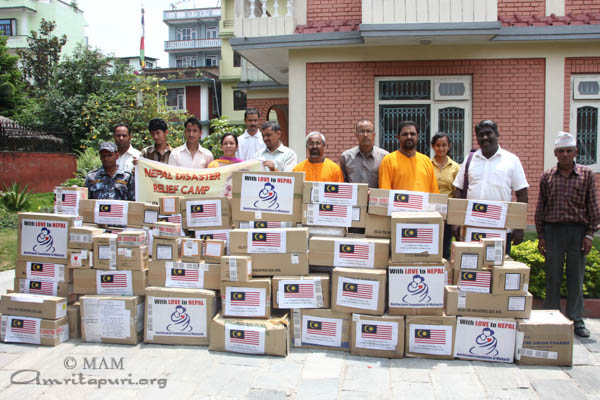 In the last few days Amma’s ashram has provided 1,00,000 Tetanus Toxoid vaccines and tons of medicines. Due to the thousands injured, the need for the Anti-Tetanus Toxoid vaccine was strongly felt. The need and scarcity of vaccine were also voiced within the medical circles. The vaccine is not only crucial for those directly injured but equally important for the post-disaster period, where injuries from collapsed debris pose new threats for adults and children alike.

In response to this urgent need, Mata Amritanandamayi Math organised 1,00,000 doses of ATT vaccine to be urgently sent to Kathmandu by air from Malaysia. Ms. Mridula Koirala, Special Advisor to the Prime Minister accepted the consignment on behalf of the Hon’ble Prime Minister. Thus far, this is the single largest supply of ATT vaccine provided by any aid organization since the earthquake struck.

Apart from the vaccine, the Math has donated two tons of essential medicines and surgical items to the Bir Hospital, the biggest Govt. Hospital in Nepal. The supplies were received by the Hospital Director, Prof. Dr Swoyam Prakash Pandit in the presence of Ms. Mridula Koirala. The Director thanked Amma for sending the critical vaccine and the other medicines at the most needed hour. 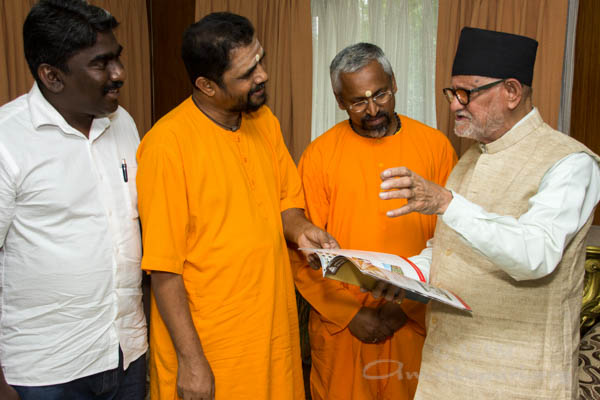 Math representatives had met Sri. Sushil Koirala, Hon. Prime Minister of Nepal on 18-5-15 and had detailed discussion about the relief activities so far undertaken by the Math. The Hon. Prime Minister expressed his appreciation of Amma’s compassion and lauded the Math’s activities in the hour of great crisis. Also, the Prime Minister opined that in the aftermath, the coming of aid and assistance from various countries and organisations from around the world was really inspiring. He added, “With the compassion and aid from a great humanitarian like Amma, I feel the burden on my shoulder lessened.”

Over the years, the Mata Amritanandamayi Math has been effectively helping in post-disaster situations. Starting from the earthquake in Lattur Maharashtra, the Math was one of the biggest agencies post-tsunami to render immediate aid in the form of temporary shelters, food, clothing, etc. to long-term solutions like housing, vocational training etc. After the natural calamity in Uttarakhand, the Math is still active there helping rebuild houses, schools, colleges and providing vocational training, empowering women and tablet-aided learning for children.