Amma arrived at the Kovai ashram in the morning, but the tour group didn’t arrive until the evening. At dusk Amma sat with the devotees and volunteers of the program along with the big tour group. Amma sang a few bhajans and started distributing prasad dinner – chapathi, idli and curry. She asked people to share a joke or story with spiritual significance. 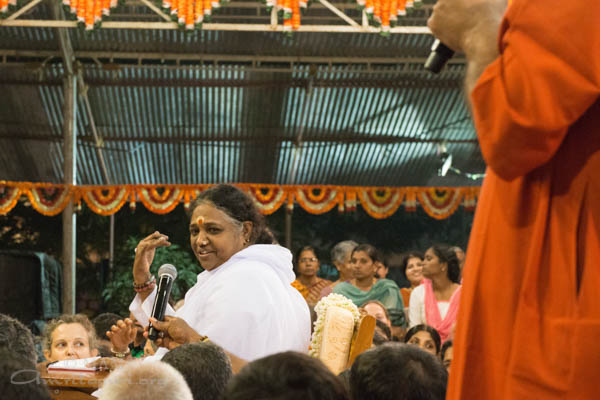 Two or three people spoke about their life experiences. One teacher from Amrita Vidyalayam mentioned a mischievous boy in kindergarten. The boy had a bad habit of stealing significant objects in the class room. First the teacher tried to lovingly tell him that it was wrong. But the boy didn’t take her seriously. So she had to be strict with him. During Sri Krishna’s birthday celebrations the students narrated different stories about Krishna. This particular boy stood up and asked his teacher, “If it was alright for Krishna to steal, why shouldn’t I?” Another child supported him saying, “That was why Krishna was born in the prison.” The teacher was shocked to hear this. She prayed fervently to Amma and felt strongly that Amma answered her from within. She replied, “Actually, the gopis prayed to Krishna daily to visit their homes and steal their butter. Answering their prayers, Krishna came and stole their butter.” The teacher was amazed to read a detailed response from Amma (about this particular Leela of Sri Krishna) in the next issue of Matruvani. She thanked Amma for providing the answer to her.

Amma decided to elaborate on the philosophy behind this to the children so that their faith in Krishna was not lost.

Amma said, “Sri Krishna was not a thief. Just as the Sun doesn’t need the light from a candle flame, Sri Krishna never needed anything from anyone.

“Some of his childhood friends were poor. As Krishna and his friends went out to play, the friends complained that they were hungry. So Krishna visited the houses of different Gopis, took the butter and offered it to his friends. He didn’t do it for his own sake. 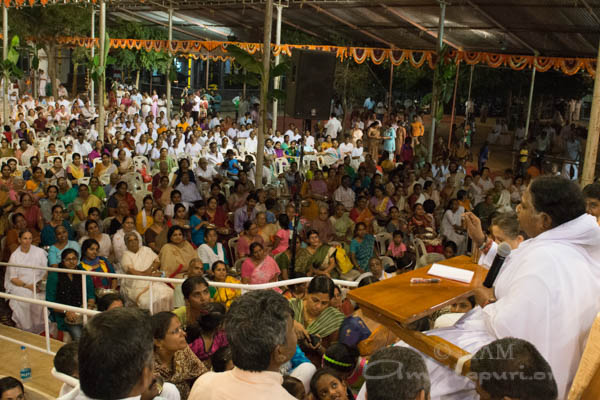 “Secondly, the family members of the Gopis were not fond of Krishna. They thought that Krishna was a mere cowherd boy. But the Gopis had deep devotion for Krishna. They longed to offer butter to Krishna, but were forbidden by their family members. Even while churning the butter, the Gopis prayed to Krishna to accept the butter as their token of love. They stored some butter in pots and left to sell other milk products such as buttermilk, butter and cheese.

“By stealing the butter, not only did Krishna answer their prayers, but also stole their hearts. That was why he was known as chitta chora, stealer of hearts. As the Gopis went out for business they thought constantly, ‘Will Krishna visit my house today? Won’t he grab his share of butter?’ Thus they were constantly thinking of Krishna.

“By engaging himself in the divine sport of stealing butter from different households, Lord Krishna hit three birds in one shot. Apart from satiating the hunger of his poor friends, Krishna responded to the prayers of the Gopis and helped them to think of him constantly.”