15 Sep 2014, Amritapuri
The day started with an early morning Mahaganapathi human at the Kalari. It was followed by a GoPuja (cow worship) and procession. Cows of the ashram, adorned in colors were brought in a procession to the front of the Kali Temple. They were offered fruits by devotees and children dressed like little Krishnas. A brief puja was also performed to them. 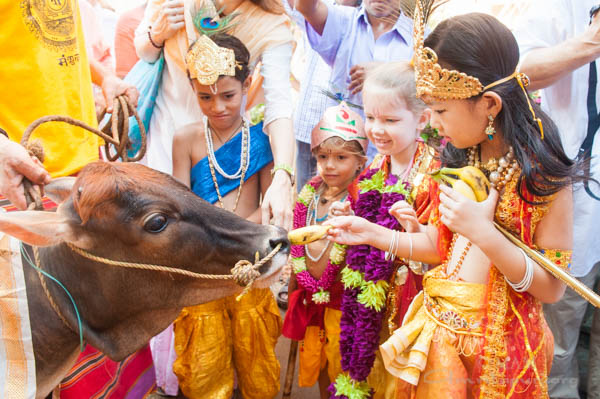 In the afternoon, as per the yearly tradition, for Krishna’s Birthday day, Amma came to the front of the Kali Temple to watch the children and youngsters take part in Uriyadi, trying their luck to break swinging pots of water. The game is a reminiscent of little Krishna’s escapades stealing pots of butter. This was followed by joyful Krishna bhajans led by Amma. 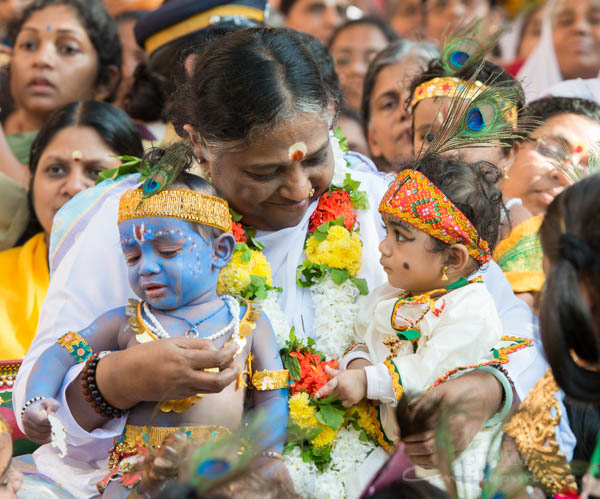 Later Amma joined the daily bhajans session taking place in the main hall from 6:30 to 8pm.
At 10:45pm, to conclude the special celebration day, the reading of the Srimad Bhagavatam started on the main stage, along with a special puja honoring the birth of Lord Krishna. The hall was filled with devotees and ashramites. The stage was adorned with beautiful Krishna statues, oil lamps, garlands, trays of flowers and a large painting of Amma as Krishna. Amma joined around 11:30pm and enjoyed listening to the Srimad Bhagavatam for some time. 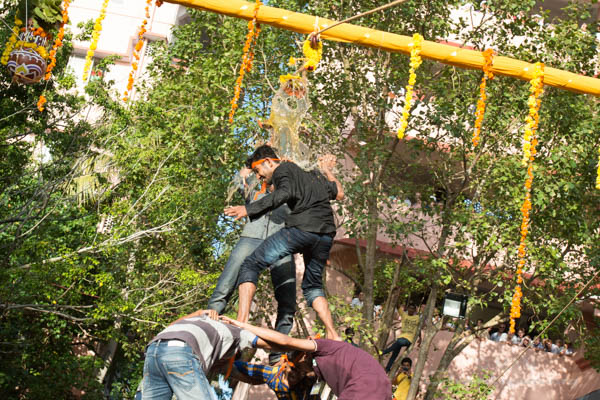 At the stroke of midnight, bells announced the advent of the divine moment: Lord Krishna’s birth! Amma led a special Krishna bhajan session. She asked people to clap their hands and dance forgetting all their worries. The hall swayed with Amma as she was singing.
After the bhajans, Amma’s message was shown on the screen {news}. Later, to end the special day Amma gave a prasad of sweets to all those present. It was around 2:30am when she went back to her room.