On the way from Bengaluru to Mysore, Amma stopped at Caveri river in Sri Rangapanttinam.  Amma sat on the banks of the river with the tour group and led all in meditation as the sun set.  The setting was beautiful and picturesque, as all sat on the temple steps under the shade of large trees gazing at the flowing river and large flocks of migrating birds flying over head.  Amma gave satsang and  reminded everyone about the purpose of life and traveling on such a yatra. Many shared their experiences from the tour and the transformation that has taken place in them. After that, Amma sang bhajans and served dinner to everyone before finally finishing the journey to Mysore. 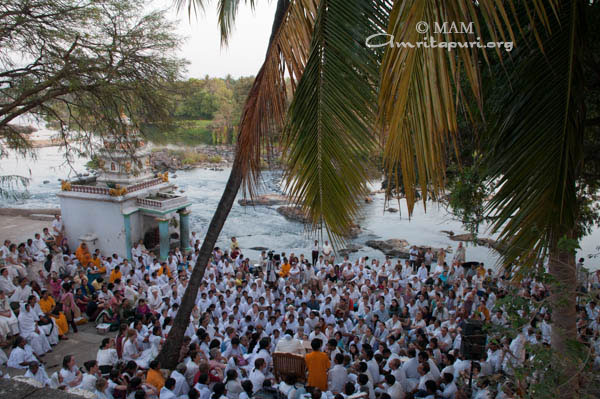 When Amma arrived at Mysore, she was given a warm welcome by a throng of cheering devotees.

Amma was officially welcomed to Mysore by the District In-Charge Minister S.A. Ramdas, the chief priests of the Sri Chamundeshwari temple atop Chamundi Hill, Nagendra Dikshit and Shashishekhar Dikshit.

A telemedicine unit was launched at the Amritakripa hospital in Mysore by Minister S.A. Ramdas. ISRO officer VV Bhat was also present on the occasion. With this telemedicine unit, the hospital will be connected to AIMS {news} and will be able to the deliver the modern medical facilites to the patients of Mysore.

The stage was decorated with traditional folk art of Karnataka in beautiful colors and sketches. Amma’s charitable activities were also portrayed on the walls through this artwork. 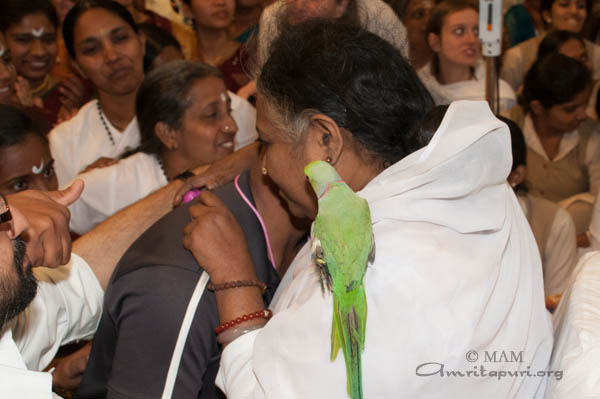 Various cultural programs by the students of Amrita University were presented during the programs.  Near the end of darshan three pet parrots were brought to Amma, and spent the rest of the night sitting on her shoulders. The last people to come for darshan were some local ladies who brought Amma different grains on woven winnowing trays as on offering to Nava Durga.  Amma playfully mixed all the grains together on the trays with ghee and sugar with her own hands and made a unique mixture that was then distributed to everyone in the hall.

At the very end Amma sang ‘Matarani’ and the program ended around 4am.