After Hyderabad, Amma traveled south to Bengaluru where she held a two day Brahmasthanam festival.

Both days saw massive crowds descend upon the Bengaluru ashram coming to hear Amma’s bhajans and satsang and to receive her darshan. 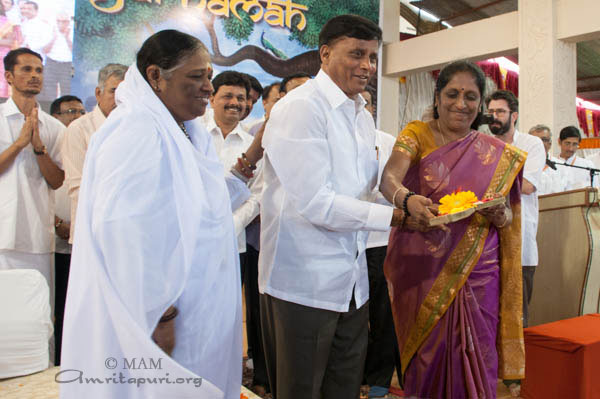 Amma shared the dias with Karnataka the Housing Minister, V Somanna.  Along with the District Collector of Raichur, Mr Somanna also helped distribute keys for the houses built by MAM for the victims of the disastrous floods in Raichur.

The four island villages in the Krishna river belt – Kurvakurda, Mangigaddi, Kurvakala and Agrahara – were the most affected villages during the flood. People living in these villages were completely cut off from the mainland with no electricity, transport etc. As per the rehabilitation plan, people from these four villages have been relocated in the mainlands of Dongrampur and Aktur.

With this, MAM has completed the construction of all 877 houses, as per the MoU with the state government {news}. You may recollect that MAM has declared 50 crores relief package {news} for the flood affected in October 2009.

In almost all the stalls present at the program, students of Amrita University were enthusiastically doing seva, from the Amala Bharatam booth, in the kitchen, dish washing, to preparing prasad.  Through this they were able to get a taste of seva and enrich their education.

During the programs, the students of Amrita University presented a musical drama on the life of Sri Krishna.  The play demonstrated the students’ creativity and showed the time and dedication they put into it.

At the end of the final program, at about 5.00 am, Amma sang two bhajans and made every one clap and dance.