After sitting for almost 12 hours of continuous darshan during the last day of programs in Calcutta {news}, Amma still wanted to do more for her children.

During the darshan, at about 6:00pm, she announced that the road had to be cleaned and in this way the ABC would be launched in Calcutta. She sent brahmacharis to inspect the area that was to be cleaned and procure the necessary equipment for the cleaning operation. 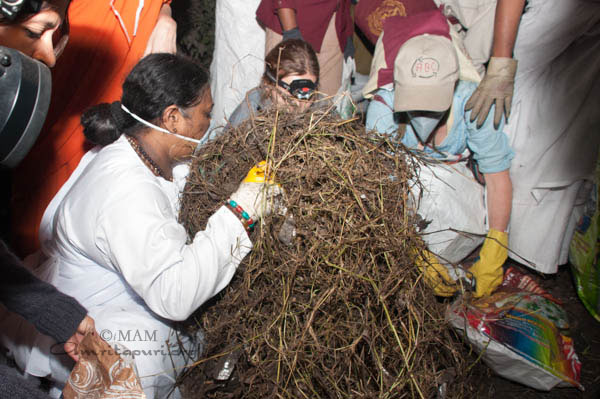 So immediately after darshan at 11 pm, getting up from the stage Amma walked down the long driveway out to Budge Budge Trunk Road, the busy street that passes in front of the ashram. Along with 800 odd devotees, Amma then spent the next three hours cleaning 3km of the road outside the ashram. Amma herself donned gloves and a mask and got right into the filth that had accumulated over the years along the roadside. The devotees fanned out along the roadside picking up garbage of all shapes, sizes and smells and bagged it all up for collection. After raking, shoveling and scraping up the trash from the pavement for three hours, Amma then walked the entire 3km stretch of the road to observe all the devotees hard at work and show her appreciation for their efforts. On her way back to the ashram a large lorry arrived to collect all the bags of trash that had been collected.

Throughout the night, many local residents were roused from their slumber by the laughter and joy with which complete strangers from all over the world were cleaning their neighborhood. Many opened their doors and came out with stunned looks on their faces see what this strange celebration was that was taking place outside in the cold night. The stunned police who came to escort Amma was also helpful in directing the busy traffic on the road. The next morning when Amma and the tour group left for Odisha and the next stop on the tour, the road was completely spotless.

Since its launch, the Amala Bharatam project has held large clean up drives all over India. Several State governments across India have pledged their support for the Campaign and have sponsored clean up drivers in their states.{read more on ABC}