After traveling for three days from Delhi over a distance of more than 1500km, Amma finally arrived in Kolkata. Upon arriving in the ashram there, Amma served prasad dinner to all the local volunteers and the tour group. Amma sat and sang bhajans and shared jokes with everyone. 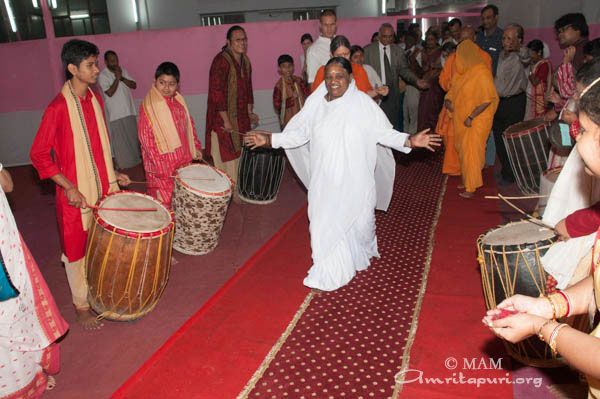 Sri. Partha Chatterjee, the Minister of Commerce and Industries, Govt. of West Bengal officially welcomed Amma to Kolkata during the first evening program. He also helped extend the Vidyamritam and Amrita Nidhi programs by distributing 100 scholarships and 100 monthly pensions to local students and women in need.

Amma delighted all the local devotees by singing many bhajans in Bengali, and even conducted some of the manasa puja in Bengali.

After the end of the two day program, as soon as darshan ended, Amma led everyone in a late night Amala Bharatam seva and cleaned up 3km of the road just in front of the ashram {news}.
-Kannadi