After the final program in Kolkata, Amma travelled south down to East coast of India and held her first ever programs in the state of Odisha.  Amma and the tour group all stayed at the brand new Amrita Vidyalayam in Bhuvaneshwar, that will start holding classes in the coming months.  Upon arrival to the school Amma served prasad dinner to all the local devotees and the rest of the tour group. 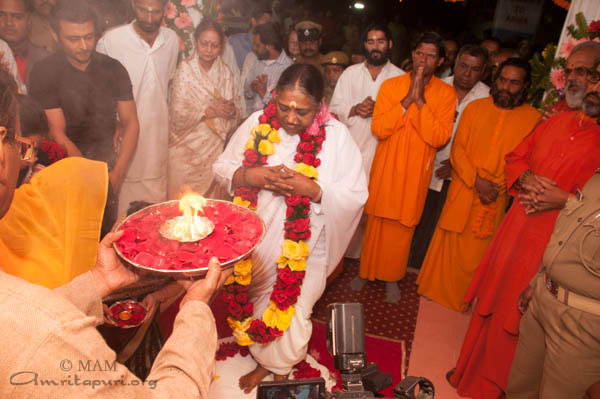 The following evening Amma held a public program at the Janta Maidan.  Many senior Ministers of the State shared the dais with Amma and officially welcomed her to their state, including the Chief Minister Naveen Patnaik, The King of Puri Gajapati Dibya Singh.  Navin Patnaik addressed the crowd, welcoming Amma to the land of Jagannath by saying that Amma is an inspiration to all of us.  Additionally the Deputy Director of Indian Institute of Technology School of Electrical Sciences Prof Ganapati Panda, Chief Information Commissioner Satyananda Mishra and Centurion University Pro-Vice-Chancellor Dr Ardhendu Mauli Mohanty were also on the dais to welcome Amma.

The Chief Minister helped extend the Vidyamritam program by distributing scholarships to 100 local poor students and 100 widows were also given monthly pensions as part of the Amrita Nidhi program.

Upon starting Amma’s satsang the audience began cheering and it was translated into Odia.

Amma also sang many bhajans in Odia as well as leading people in Manasa Puja in Odia. 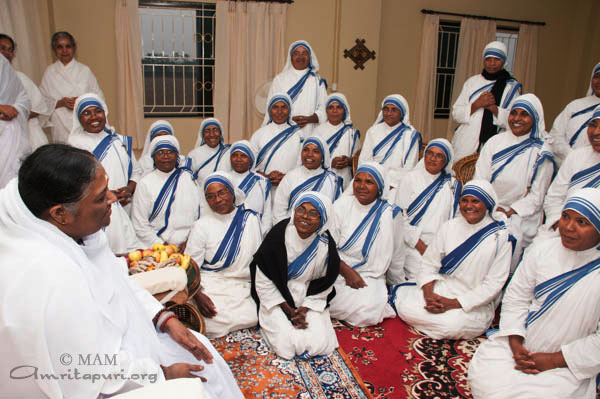 Once darshan started, there were several hours of spectacular cultural performances.  The first was a Badya Taranga, percussion performance, by guru Dhaneswar Swain & his troupe of artists. Then there was an incredible performance by a classical Odissi dance, Jatayu Moksha by Guru Ratikanta Mahapatra & Sujataa Mahapatra.  The next dance was a Nava Rasa by Guru Smt Aruna Mohanthy and the dancers of the Odisha Dance Academy. The final dances were both Gotipua dances (in which boys dance in girls costumes) by Guru Bijay Kumar Shaoo and the dancers of Naxatra Gurukul; and finally by Guru Birabara Sahoo the dancers of the Konarak Natya Mandap.

The darshan ended at 7 a.m the next morning and then Amma and the group started straight away for the next stop on the tour to Vishakahpatinam.