It was a nice sunny day at Amritapuri and everyone was waiting on the beach for Amma to come for the usual meditation and Q&A session that is always held on Monday and Friday evenings.

A little after 5pm Amma arrived on the beach and shortly after that the meditation started. As the light of meditation and love grew brighter within the hearts of those meditating, slowly dark clouds started gathering in the skies above and the outside became darker. 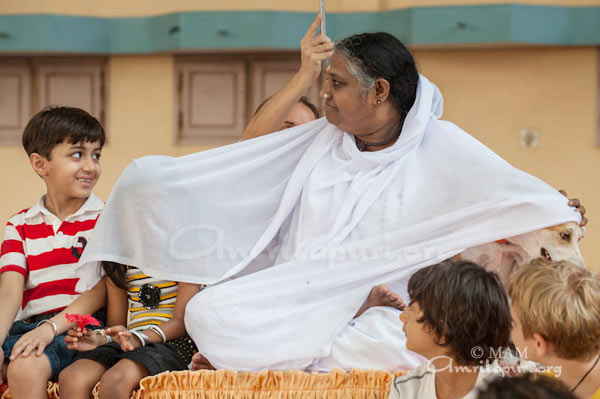 Just as meditation was about to end a light spattering of drops fell. Amma opened her eyes as more drops came falling down… There was oohing and laughter in anticipation of what Mother would do. Amma as usual was smiling.

The rains were slowly growing heavier. Amma asked everyone if they would like to go back or stay on the beach….

Everyone answered – STAY HERE!!!! So all stayed put at the beach..

Many tried to hold umbrellas over Amma but Amma wouldn’t allow it as her children were getting wet. Tumban the ashram dog, as usual was lying next to Amma on the peetham. Amma was trying to protect him with her sari, though all the time she herself was getting wet! She asked for one of the umbrellas which people had unsuccessfully tried to hold over her and she herself held it over Tumban to protect him from the rain. Tumban did not seem to be enjoying the rain quite as much as Amma’s other children and in time went away for drier grounds. Amma held a beach umbrella over all the little children who surrounded Her, like a mother hen holding her wings over her chicks to protect them.

Amma said that in her childhood she would run out with the other children and play in the rain. She said that if the rain got any heavier then all of us could have a bath together.

As people continued to try to hold an umbrella over her head, Amma got up so that nobody would be able to do so. The water streaming down her face washed her sandal and kumkum tilak down her smiling face. Ultimately she sat down and started singing “He Giridhara Gopala” in an ecstatic mood. After that she sang “Bandalo Bandalo” and made everyone clap each other’s hands during the singing… All the while she covered up her microphone with her sari so that it wouldn’t get wet. 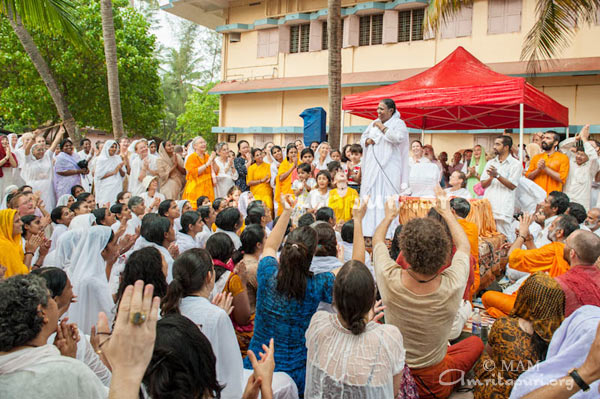 Everyone was full of joy and laughter and grateful to be in this miraculously transformed scene with Amma.

After the bhajans were over Amma asked if we should do a Q&A session, everyone laughed and Amma decided that we should pass around the microphone and tell some spiritual jokes. Amma said she loves to hear her children’s laughter, and to her it’s like the blossoming of beautiful flowers. Amma told the first joke, which set everybody laughing and then she encouraged others to come up with jokes of their own.

Three other people told short jokes. The rain began to lessen as Amma started giving darshan to the new people who had just arrived on the beach… a large canopy on four posts was set up over the people coming to Amma for darshan. Slowly the rain grew heavier again as Amma finished darshan. Amma went to her room and appeared again in a short while for bhajans.

The strains of “Shyama Sundara Madna Mohana Radhe Gopal” spread the divine vibrations of Her voice throughout Amritapuri.

Normally if we were caught outdoors in a downpour we would be miserable and would maybe even blame the Gods for the weather! But with Amma it is the very opposite – each moment with Her is a celebration and it does not depend on what is happening outside.