There have been many unusual animals in the annals of Amritapuri. Amma’s sadhana days featured many helpful creatures such as: the eagle that dropped food before her when she was meditating; the dog that brought untouched food packets to her in his mouth; the cow that would break its ropes to give her milk. Many other unusual denizens of the animal kingdom have shown up in Amritapuri over the years. Temple going peacocks, bhajan going crows, friendly serpents, young elephants, a couple of monkeys, veggie burger loving eagles, unusual rats, various cats and dogs.

For years, a red dog named Kaiser protected the ashram from all unsavory characters whether two legged or four legged. Woe to the person who crossed the ashram boundary drunk or with ill intent. In a crowd of thousands Kaiser would trot straight to that person and stand before them barking and barring their way. 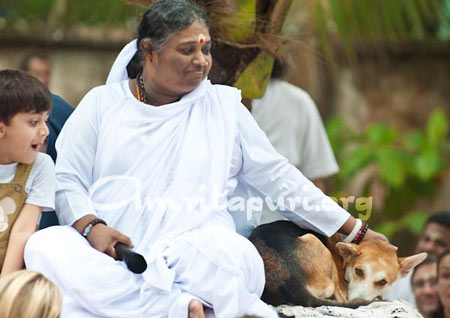 After Kaiser’s demise, there was a vacancy in this position for a couple of years. One day, a young multi-coloured dog who had been around for sometime, showed up in front of Amma during a cremation ceremony. He drew Amma’s attention, so she called him to her. He immediately obliged and came to sit right next to her. She was told that his name was Tumban (meaning “Abundance”), and started to use it when calling him. Since then he came into the limelight. He became the designated official ashram dog and was given a collar*, baths and flea powder.

Tumban takes his duties seriously and he patrols the ashram boundaries as Kaiser had done, apprehending questionable characters-whether animal or human and meeting vehicles arriving in the middle of the night. When visitors arrive at the ashram, late night, Tumban greets them, and walks with them to the accommodation office, then to the assigned building. He just stops short of carrying the luggage…

Tumban often shows up at the beach for meditation and lies in front of Amma, motionless, paws stretched forward on the sand in a kind of pranam or prayer. Sometimes Amma will ask him if he came to meditate and invite him to come closer. Thus, he began to “meditate” on the peetham next to Amma. He even had his own asana -the small piece of material for sitting. 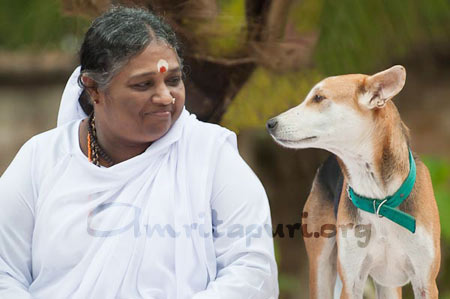 Often, during darshan, Tumban comes to Amma: she greets him and feeds him. He’ll then lie there next to her for a while. Amazingly, Tumban never accepts any food from anyone except Amma herself or the person assigned for feeding him… His favorite food? Chappatis with butter!

Tumban definitely enjoys a very special relation with Amma. When darshan ends and Amma stands up, one can see him rushing towards her in the midst of the crowds to accompany her to her room.  He is said to get jealous if Amma showers more attention on the little kids that get next to her too…

One night at bhajan, Tumban appeared on the ramp below the stage. He walked back and forth in front of Amma wagging his tail. Finally, he stopped in front of her and looked at her expectantly, his tail oscillating rapidly. She smiled at him, and motioned him to come on stage. In one graceful leap, he landed at her feet and curled up. Amma told everyone how well behaved and correct his behavior was. He had waited for an invitation before presuming to come on stage!

When Swamiji placed Amma’s songbook on the music stand next to him, Tumban lost his composure and looking around, jumped back off the stage. Everyone groaned. It had been so cute to see him there.

Later in the bhajan, Tumban returned, jumped back up and took his place. This time he stayed for the rest of bhajans. In fact, he didn’t even move during arathi. He was not disturbed by the revolving flame. When Amma showered flower petals on the brahmachari doing the arati, a few petals fell on him, and he remained curled up at Amma’s feet. The light of the flame was flickering on his smooth coat. Was he awake or in the midst of a beautiful dream? When arathi is done to Amma, in a sense, it is also done to the One, to all Creation. Although one does not normally do arathi to dogs, it seemed totally right to watch this other form of creation receiving arathi along with Amma!

Tumban is an ideal ashramite, combining sincerity and regularity to the spiritual routine of the ashram, obedience and devotion to the Guru. He comes regularly to morning archana, alternating between the women’s side and the men’s side, as the groups do archana separately. He unfailingly attends the Upanishad classes and Ramayana discussions in the temple; participates in the meditation every Tuesday, and sometimes even goes up for his Prasad lunch. Tumban also attends the webcasts of Amma’s Devi Bhava when she is on tour! He has been supplied with his own asana for all these occasions. Amma has praised Tumban for being detached and devoted to the ashram and ashram dharma. 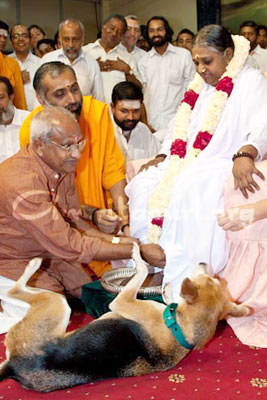 A brahmachari related how on Onam day, for some reason, Tumban wouldn’t allow a devotee to perform the padapuja on stage. He simply lied down in front of Amma, in complete pranam, blocked the devotee way by repeatedly stretching his body before the puja items, refusing to leave the place… But, when Amma asked him to move aside, Tumban immediately obeyed!

One day, a bigger dog showed up in the big hall for archana. He refused to give any attention to Tumban’s barking, and was lying down on a bunch of asanas close to the stage… Tumban was very alarmed, but was scared to face the stronger and bold invader. He must have thought well of the best tactic to follow to chase him away and soon he was ready for action: he quietly trolled towards the dog, reached him and peed in his ear (!)… before running away, obviously satisfied with his deed. This was enough to ruin the invader’s plans of feeling home, so he left the hall a bit dazzled by what had just happened to him… He was back next day, did the same thing, received the same special Tumban treatment, and never returned again!

There are too many stories about Tumban to recount in one post. Many ashram residents have their little stories with him, like coming to greet you and cuddle if you were away for a while and just returned, waking you up by scratching on your door, if you are a regular archana person and one day fail to be in your usual place on time, etc.

Some enjoy wondering about Tumban’s background, his past life, what he had done to achieve such an envious position in the ashram, etc. But our job is not to worry about who Tumban IS, but to find out who WE are! That is the reason and goal for our human birth, and even animals are willing to give us a boost on our quest and inspire us with their relationship with Amma.

*in general, dogs are discouraged at the ashram due to fear of disease and the problems they have created in the crowds.