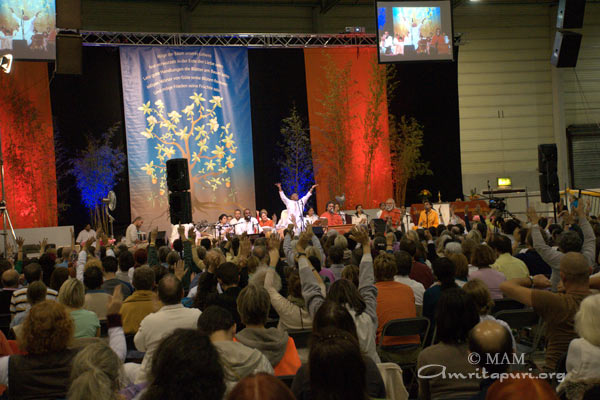 On the first evening Amma was greeted by several local dignitaries. Renowned artist Gabriele von Lutzau, who collaborated with AYUDH during the 2011 summer retreat officially welcomed Amma to Mannheim. She is the artist who helped create the dove statue which was placed in the renovated park area at Heilig-Kreuz. It stands as a symbol of the eight Youth Development Goals.{news} The central pole of the monument carries a dove – universal symbol for peace and hope. Ms von Lutzau presented Amma with the final sculpture that will be installed in the park.

Amma was also welcomed by Mr. Dieter Heusel, Youth Coordinator for the city of Michelstadt. He presented Amma with a painting of the Michelstadt town hall, one of the oldest in Germany. Also on the dais was Mr Harish Chander, Cousul of the Indian Embassy, Frankfurt.