From 24 – 31 July 2011 the M.A Centre, Germany, hosted the 7th International Youth Initiative Reaching New Heights – The Power of Youth to Change the World, a multinational youth programme that welcomed 180 youth from 20 countries in Europe and beyond. 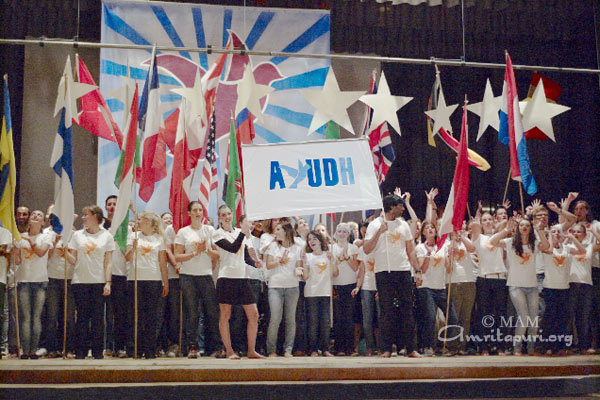 Reaching New Heights focused on eight main challenges faced by youth in today’s society: lack of self-confidence, depression and suicide, addictions and substance abuse, erosion of culture and values, violence, poverty and unemployment, lack of perspective and meaning, family and social crises and environmental challenges. Each country group chose one specific challenge to deal with during the initiative.

For six months prior to the camp, each country group chose one specific challenge to work with. Based on scientific research, discussions, and interviews with affected youth they produced a short video clip which was presented at the beginning of the camp.

Four ‘Powers’ were then identified to deal with these problems: the power of confidence, the power of commitment, the power of creativity and the power of community. Tackling the eight challenges through these four powers thus leads to eight corresponding goals, referred to during the camp as the ‘Youth Development Goals’: Confidence, Understanding, Health, Tolerance, Nature, Culture, Progress, and Vision.

The four powers were dealt with through talks and discussions during the camp. The power of confidence was discussed by Br. Shubamrita Chaitanya, who highlighted the importance of developing self-confidence as a tool for personal empowerment and suggested ways in which to achieve an increased sense of self-worth and integrity and ways to surmount obstacles in life.

The power of commitment was discussed by Hollywood actress and former world champion kick-boxer and boxer Lucia Rijker who shared with the youth how commitment, dedication and determination had helped her achieve new heights in the fields of athletics and acting.

The power of creativity was discussed by the German artist Gabriele von Lutzau*, who emphasized the importance of creativity, originality and self-expression and suggested ways in which youth can uncap their own imaginative and innovative powers in order to bring change in their personal lives and the lives of others. In her talk she shared with the youth how she could turn scars into stars by using her art as a tool to come out of the traumatic experiences she had gone through.

The power of community was discussed by Bri. Dipamrita Chaitanya who highlighted the importance of belonging to, and contributing to, a value based community in order to develop the character and value system of youth.

Making the initiative relevant to the youth themselves, the local community, and the wider society three large-scale projects were organised in close collaboration with the city of Michelstadt.

The first of these projects was the landscaping and garden project, which involved renovating and reshaping the park area of Heilig-Kreuz in Michelstadt, a town close by the M.A. Center Germany. Youth who participated in this workshop helped to re-design the area by plating greenery, repairing the broken bridge, cleaning the riverbeds and pathways and refurbishing the signs.

The second project was the creation of an artistic monument, lead by students from the woodcrafts school of Michelstadt. Participants designed a monument which was placed in the renovated park area at Heilig-Kreuz at the end of the camp. It stands as a symbol of the eight Youth Development Goals. The central pole of the monument carries a dove – universal symbol for peace and hope, made by Gabriele von Lutzau. 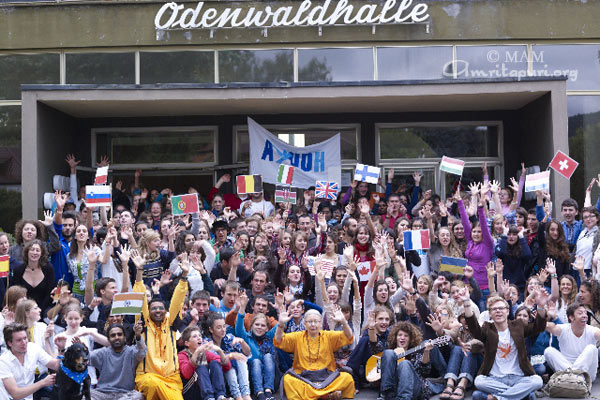 The third and largest project was a Musical presented on the last evening of the week in the Theater-Hall “Odenwaldhalle” in Michelstadt. Speaking on the occassion, the Mayor of Michelstadt, Stephan Kelber said: “In the name of all the people of the Odenwald region, of 17,000 people, I can say that we are very happy to have you all here in this town. We are proud indeed that you are here, and we feel a bit like the center of the world this evening.”

For six months the Ayudh groups from all over Europe had been writing songs, creating theatre scenes, dance choreographies and video documentaries which would exemplify the challenges they dealt with and show possible solutions to the audience. During the youth camp at M.A. Center Germany these individual scenes were put together into one performance. In workshops the youth took care of all aspects of the show: costumes, props, choir, stage construction, painting the backdrop, light, sound and video projection. Within just one week the youth created an amazing performance – a true example of the collective power of youth to inspire, create and reach new heights together. At the end of the performance, the hall echoed with the chants – “Mata Rani ki Jai”. Even with the intense activities during the week, the youngsters did not miss the chanting, meditation and yoga/tai chi sessions. Through the dedicated work of many volunteers and through the sincerity, joy and enthusiasm each person brought to the initiative, the 7th annual retreat was a complete success.

The event was supported by the “Youth in Action” programme of the European Commission for Education and Culture, the state of Hessen, the city of Michelstadt, the European Year of Volunteering, and the UN’s International Year of Youth.

*Gabriele von Lutzau, who was also the patron of the initiative, had earned the “Bundesverdienstkreuz”, the German order of honor, for her outstanding role in rescuing passengers during the hijacking of a passenger aircraft by terrorists in 1977. As a stewardess on the kidnapped flight she had played a crucial role in the rescue operation and had shown enormous courage and compassion despite the life-threatening circumstances she was in.