Embracing the World (ETW), the international organization of Mata Amritanandamayi Math, formally presented its donation of US $1,000,000 to Yoshihiro Murai, the Governor of Miyagi, Japan. This money will be used for Miagi children’s education fund. The donation is part of Ashram’s Japan Tsunami relief and rehabilitation work. Amma had announced this amount during her visit to Japan in the month of July {news}.

ETW was represented by its Indian General Secretary, Swami Purnamritananda, as well as the Country Director of ETW Japan, Br. Shantamrita Chaitanya handed over the money to the Governor.

Mentioning the potential for various relief measures, ETW’s representatives expressed their ongoing commitment to the reconstruction work in the region. Governor Murai responded by saying, “We are deeply grateful for your support… Embracing the World is a world-renowned NGO. Thus I hope that you will use your international network to keep people all over the world informed of the disaster conditions here, so they will remember in the future.”

Also in attendance was Indian Embassy Tokyo’s Deputy Chief of Mission, Mr. Sanjay Panda along with the other ETW volunteers. 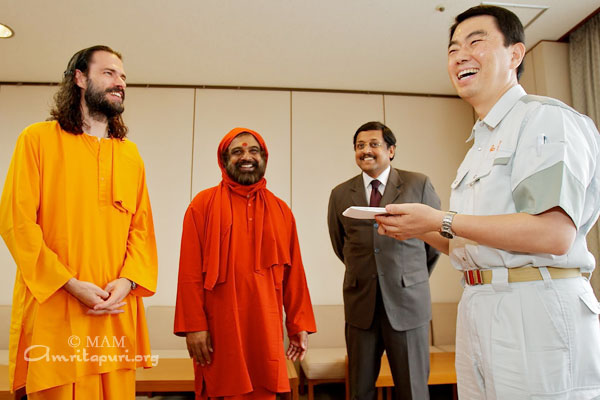 Just two days after the earthquake and tsunami in March, ETW dispatched a team of volunteers to Miyagi to determine the scope of the disaster and distribute relief supplies. Food and relief supplies were distributed at Kotodai Park. The volunteers have continued to return to the area to provide aid and help with the relief work in Ishinomaki and Kesennuma.

Since 1990, Amma has been coming to Japan every year to conduct programs in cities such as Tokyo, Kobe, Osaka, and Sapporo. Swami Purnamritananda has been visiting Sendai for the last ten years, offering bhajan and spiritual talks.