Amma announced a donation of one million US dollars towards the relief and rehabilitation of Japanese disaster victims, particularly for the education of children who lost both their parents in the devastating March 11 tsunami.

The donation will be made by Mata Amritanandamayi Center (MA Center) USA along with Amma’s global charitable network, known as ‘Embracing The World.’

The announcement was made at a crowded public program in the Grand Ballroom of Garden City Shinagawa.  Mr. Keiki Soma,representative of the Miyagi Governor also Deputy Director of the Miyagi Prefectural Government Office was present on this occasion. 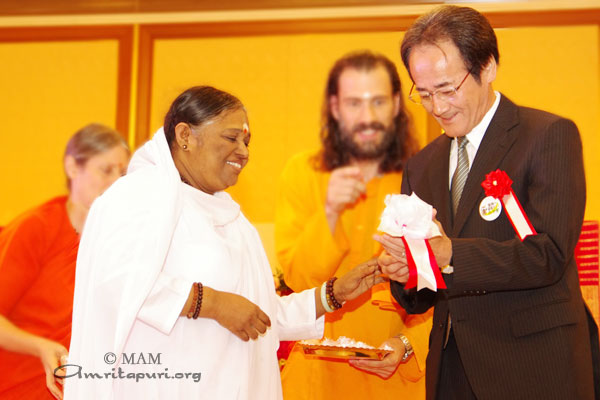 You may recollect that ( read blog ) Amma’s volunteers have been actively participating in the relief work from March 13, just two days after the earthquake and tsunami. Their activities included cleaning rubble and debris from houses and agricultural land, assisting the elderly and children at relief camps, distribution of food, household utensils, medicine and other daily necessities. In addition to providing the essentials, the volunteers provided spiritual and psychological counselling to the local people in the tsunami affected areas.