AYUDH was invited by the catholic church to co-facilitate the inter-religious peace prayer. They also joined dialogue-groups to discuss ways to peace within a multicultural society. The youth read out from Amma’s teachings, sang the bhajan “Everyone in the world” and prayed “Lokah Samastah Sukhino Bhavantu.” 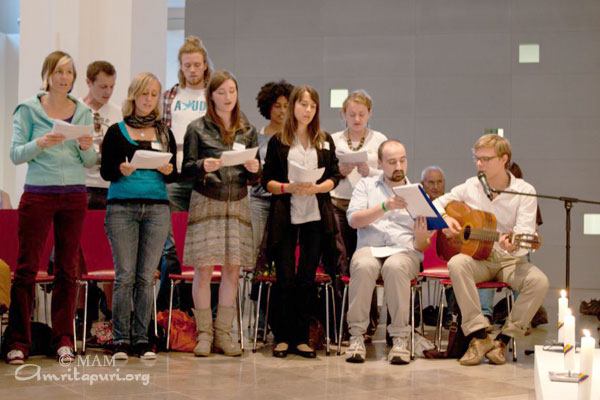 In a church centre in the Munich neighbourhood Haidhausen, about 120 representatives of various religions came together at an inter-religious youth meeting and collective prayer for peace.

Through the International Peace Meeting, the hosts, the congregation Sant´Egidio and the archdiocese of Munich and Freising discussed topics about living together with different religions and cultures. 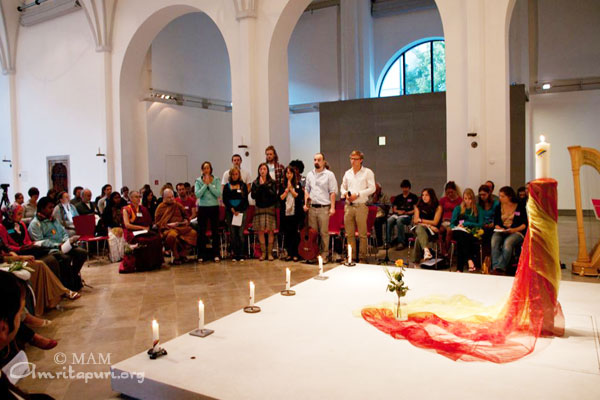 Before the communal peace prayer, the individual religions prayed in accordance to their respective traditions, lit a peace candle together and placed flowers in a vase to create a colorful bouquet. Afterwards, the participants met for a dialogue where representatives of the different religions shared their own views and perspectives on ways of being in the world in respect to peace.

“In everyday religion, normally we don’t meet like this, rather everyone prays in their own way. This meeting offered the opportunity to get a taste of the different traditions, to discover what they have in common, and to remove prejudices. The building blocks of religion should be used to build bridges rather than walls” commented a participant, Nath Hirsch from AYUDH