Onam celebration with Amma in Amritapuri

As always the Onam festivities began early in the morning in Amritapuri. The Pookkalam, Nirapara, Nila Vilakku, as well as hanging cluster bunches of bananas decorated the verandah in front of Amma’s room. At 9:30 am Amma was led into the large hall by Panchavadyam musicians from her orphanage in Paripally. Amma gave her Onam message to the packed hall of devotees who had come from all over India and the world to celebrate the occasion. 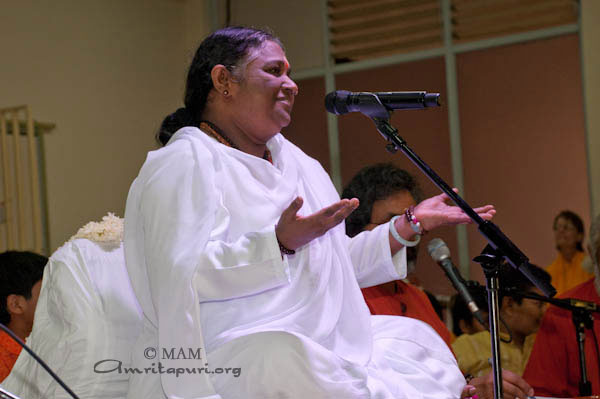 What is the message of Onam? This is an occasion to think about that as well. Are we getting closer to the values and principles for which Onam stands? Or is it that, with every Onam, we are drifting further and further away from them? Each one of us should introspect and ask ourselves these questions.

During Onam there are many pookkalam competitions. Each team will make a decoration using flowers of different colors. Each color represents a different goal in life—gaining wealth, enjoying pleasure, etc. But in order for the design to be beautiful and win the competition, the flowers must be kept within the boundaries of the circle. The boundary represents dharma. In order to win the competition of life, all of our goals and pleasures need to remain within the boundarites of dharma. Then life will be beautiful and full of happiness” Amma reminded everyone. 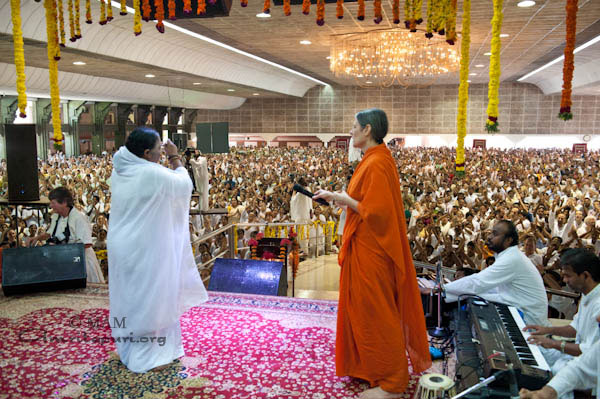 Amma gave darshan while pot after pot of rice, sambar, avil curry, papadam, and payasam was positioned near the stage. Once all was in place, Amma began to distribute the traditional Ona-Sadhya to one and all. Amma personally served each and every one of the many thousands of people who had … even the biggest ashram resident at the end; once Amma had served all the visitors and residents she came down from the stage and playfully served Lakshmi the ashram elephant her share of Ona-Sadhya.

After the evening bhajans, all gathered again in the hall to enjoy various cultural performances that had been prepared for the occasion. Amma and all the devotees took in the variety of dances, dramas and musical performances, performed by the university students and ashram residents alike. Adding flavour to the celebration, there was a tug-of-war – first between Lakshmi and the ashram residents, then between the boys and girls. Even though the game tug-of-war is a traditional part of the Onam festivities, it was the first time that this was introduced at the ashram.

Just after midnight, once the performances and games had come to an end, Amma sang a joyous rendition of ‘Bandhalo’. As a final touch, Amma surprised everyone by distributing ice cream to everyone in the hall. It was a fitting end to the occasion—symbolic of the sweetness pervading the entire day and the Onam festival as a whole, and a reminder that it is the universal values we all share that lend sweetness and beauty to life.