The elephant Lakshmi was waiting by Amma’s house after bhajans to be fed and played with by Amma. When Amma was about to come around the corner Lakshmi felt it and began trumpeting in excitement.
In the meantime a lot of ashram residents & visitors where gathered as well to enjoy the rare occasion and secretly hoping of getting sprayed with water by Lakshmi at the end. 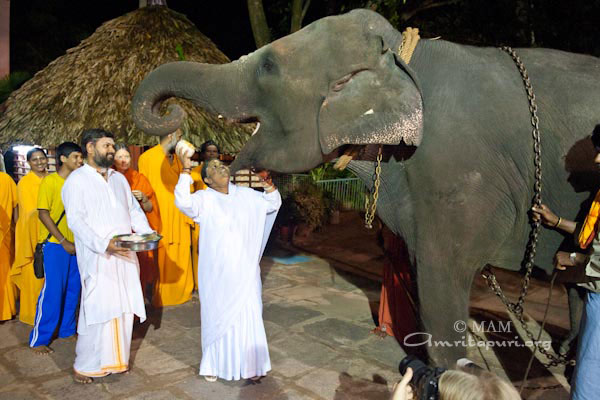 Amma fed Lakshmi balls of rice & bananas. Lakshmi was thoroughly enjoying it! Once in a while Amma teased Lakshmi by rubbing jaggery rice ball on Lakshmi’s tongue and pulling away and hiding it behind her back. Lakshmi would try to find it, with a smile on her face each time.

It was a great scene to watch! Sometimes Lakshmi would make some sounds as she was enjoying the sacred prasad given by Amma. When she was done eating there were a few pieces of food laying on the floor that Lakshmi spilled. Amma made her eat it, up to the last crumb. Amma is even teaching the elephants not to waste food.

After Lakshmi ate, a pot of water was brought in and she was drinking it happily. Out of the previous experiences of the Ashram residents they knew that Lakshmi would spray the people with water… Every time she lowered her trunk in the pot with water you could hear them oooohhhhh… and Lakshmi would drink it.. The tension was slowly building till she finally decided to bless everyone with water! Many people got wet but they loved every drop of it. 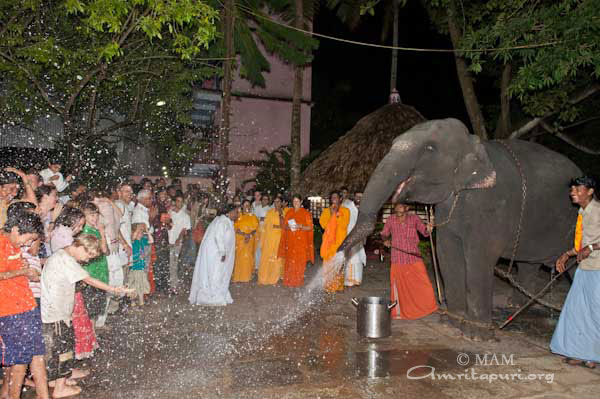 Lakshmi was really enjoying the whole thing. The whole time she had a huge smile on her face and was even playing with Amma by moving her trunk filled with water to Amma for a moment, but Amma told her not to spray Her but the other people.

When Amma was about to walk to her room Lakshmi prostrated to Amma.

Another glorious moment with Amma that will surely stay locked in the hearts of all people present.