After many hours of travel by road through the congested roads of Kerala, Amma finally arrived at Trissur at 9.00 pm. In India mahatmas are greeted in a very traditional manner, and so is Amma, But with Amma more than tradition, it is the love that defines the relationship Amma has with her children. So on Amma’s arrival there was an uncontrollable upheaval of devotees as everyone tried to get closer, to get a glimpse of their beloved Amma. The devotees spontaneously started singing ‘Amma Amma Taye’. 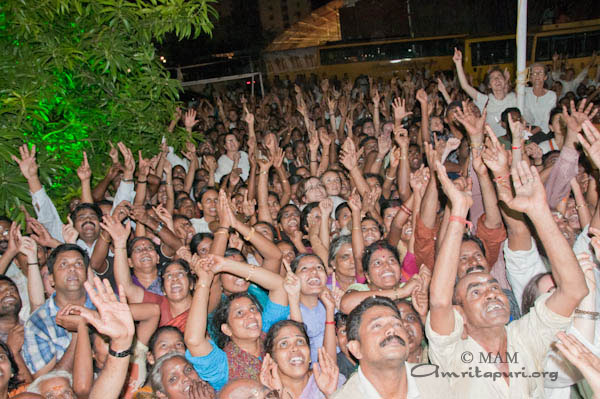 As Amma was walking up the stairs she stopped once to look at her children. At times it seems like Amma is more eager to see her children than they are to see her. Even after she went up, and the devotees turned back, Amma suddenly appeared on the terrace over the portico. Again shouts of – Mata Rani Ki Jai burst out.

The next day Amma appeared on stage to be greeted by leading citizens of Trissur – Shri. Therambil Ramakrishnan MLA, Shri. I B Paul the Mayor, and Dr. B. Sandhya I.G. of Police and a prolific writer.

Therambil Ramakrishnan MLA after having bestowed the Amrita Nidhi pensions to new beneficiaries said – “The world over there are problems in that name of religion. Religions seem to be flourishing whereas spirituality is diminishing. This seems to be the malady of the present times. Amma is giving the clarion call to hold on to and awaken spiritual values. Amma has an unique ability to awaken the masses through simple parables – elucidating the subtlest spiritual truths. Though Amma has become a spiritual luminary of international fame, she is food for the hungry, knowledge for the ignorant – it is in these forms that the needy experience Amma.” 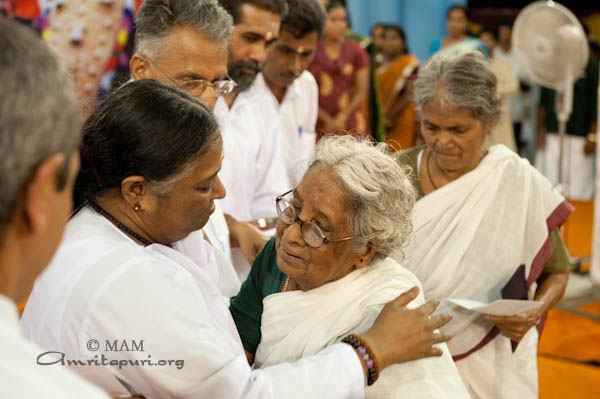 The Mayor I.B.Paul distributed Vidyamritam scholarships to 100 new deserving students. It was a pleasure to just see these children’s eyes light up as they received the first instalment of their scholarship after receiving Amma’s embrace and blessings.

Under the AmritaSREE project Amma helps women from economically weaker sections to get training in various vocations as well as remunerative occupations. The ashram also helps them start their own enterprises by providing the seed capital. Famous author and IG of police Dr. B. Sandhya bestowed these to the women Self Help Groups. A further expansion of this project is AmritaSREE Suraksha which provides insurance to the members of the SHG’s. In Amma’s presence scholarships were provided to some of the deserving children of AmritaShree SHG members.

During Amma’s darshan students from various Amrita Vidyalayams presented cultural programs. Some had the audience clapping with appreciation whereas others had everyone smiling and laughing as tiny tots vied with each other to dance and draw Amma’s attention. 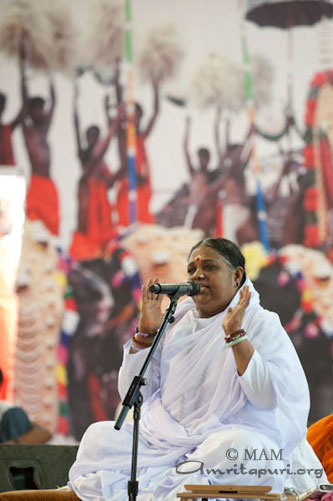 There is no special day

The second day of the program happened to be on Mothers Day. Taking this up in her satsang and said: “Amma was surprised to learn that we have started celebrating Mothers Day in India too. It is unfortunate that you need a special day to remember the Mother. The Mothers Day is meant to remember the Mothers love and sacrifice. They have special days for remembering everything – Mothers Day, Fathers day, Valentines Day, etc. But our culture is different – we do not traditionally celebrate Mothers Day here, a day to remember the Mother, because here we remember our Mother each and every day. The culture of the West is different as the family ties are not so strong. The family rarely stays together. Here even if the son is 45 years of age and has no job, the mother will work to take care of her son. In today’s world everyone is so busy that they rarely have time to remember others. Maybe this is why such days to remember those who are important in our lives have come up.”

“Motherhood is not just a quality that women should possess, these qualities are required to be cultivated by everybody to maintain harmony in the world” Amma told the devotees.

There were cooling showers towards the end of darshan, as if nature herself was indicating the completion of a mahayagna. Amma finished darshan at around 6 in the morning. As usual Amma does that extra bit to elevate everybody before she ends. Amma sang – a Krishna bhajan and Bandalo Bandalo – which had all her children dancing and shouting Mata Rani ki Jai and Hari Bol. The program ended and Amma left the stage but the moments with her, her smile, her touch, Mata Rani ki Jai – her love and joie de vivre – left an imprint in the hearts and minds of all her children in Trissur.