After a long wait and many changes in dates finally Amma had arrived in Kannur. The ashram is set in very rustic environs. There is a feel of a village – houses set close together, yards with coconut palms, mango and jackfruit laden trees, cows in most houses.

There was a huge crowd of devotees waiting to receive their beloved Amma. There were devotees from all over the world – all having come to see Amma consecrate a temple, breathe life into stone.

Amma was greeted by a tumultuous shout – Mata Rani Ki Jai. Wading her way through the crowd, Amma reached the stage where she stood showering love and grace on her children. The devotees sang a bhajan in unison and Amma waited, looking at each of the faces of her children.

Amma went up to her room but came out again over the portico – again and looked all over the ashram from there, giving directions on what was to be done for the programs for the next two days – consecration of the new Brahamasthanam {news}. Again the devotees, getting a glimpse of their Amma started shouting – Mata Rani ki Jai. 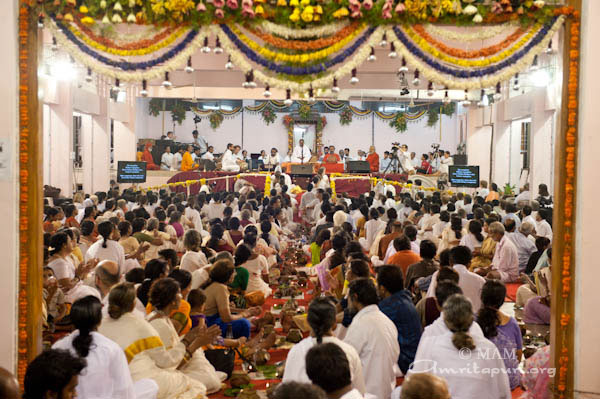 Amma appeared on stage at 10am the next morning. Amma’s satsangs made one wonder how sublime spiritual truths could be expressed through such simple, day to day happenings and examples. Amma laid stress on Dharma, on holding on to and developing values in ones life.

In the evening some of the leading citizens of Kannur had come to support the charitable activities of the ashram. AP Abdulla Kutty the local MLA after distributing Vidyamaritam scholarships, said in reference to Amma – I was taught in the Madrassa that Heaven is at the feet of the Mother, prayer alone is not enough, it is essential to serve the Mother, Islam has taught me so. 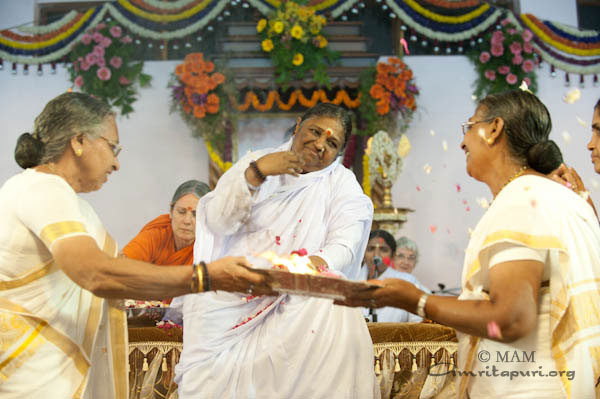 The famous writer T Padmanabhan after releasing the souvenir said – Once in an age god plants a tree so that travellers in the desert may have shade. one such rare tree is Amma, endowed with spiritual glory, giving shade to travellers in this world.

The ashrams AmritaSREE program has been promoting women’s Self Help Groups throughout India. Working capital for another 10 women SHG was given, on behalf of the ashram, by panchayat president C Radhakrishnan.

Under the Amrita Nidhi project for giving pensions to the destitute, 50 new beneficiaries were presented with the first instalment on behalf of the ashram by Smt. Sreeja, the Muncipal Chairperson.

During the two days, the children from many of the Amrita Vidyalayams presented many cultural programs – folk dances, songs, yoga, etc. Amma gave all the children who came to her for darshan, handkerchiefs as part of the Amala Bharatam Campaign.

Another Brahmasthanam and the extension of many more service projects – Amma’s gift to Her children in Kannur. It was a message to all Her children – Pray and Serve.