While Amma herself is changeless, the Ashram is constantly in a state of flux. For those living here, the changes can be gradual. But for the occasional, annual visitor, they catch one’s eye immediately. 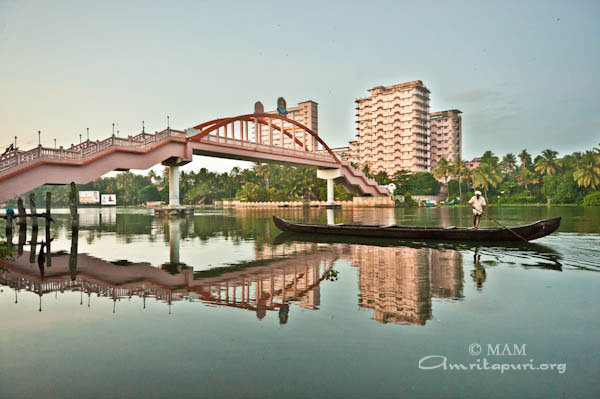 Arriving at the backwaters, with Amritapuri rising to the west, the first change one notices is that Amrita Setu has received a new coat of paint. The span is now mostly orange – allowing the bridge to stand out against the green palm trees, blue sky, and even darker blue backwaters.

The recycling center, previously next to the Ecology Center, has also moved to newer facilities at the end of the Girl’s Student Hostel on the north western edge of the Ashram grounds. There, a committed group of sevites sift through all the trash generated by the Ashram and separate it into various categories for recycling, re-use and disposal.

Amrita Setu is not the only part of Amritapuri with new colors. The main Temple has also received a makeover. While pink is still prominent, the various ornamentations, frescos and designs all feature brighter colors in shades of red, orange, and yellow. Krishna, Arjuna, and their chariot appear to virtually charge into battle on the roof of the entrance to the Temple.

In the courtyard in front of the temple, a new flat complex sits behind the bookstall. The walkways surrounding these flats feature columns as well as ornate wooden benches, window sills, and doors. 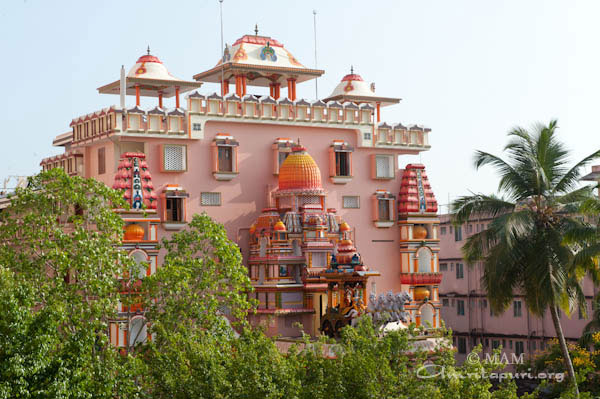 To the left of the Temple on the way to the Kalari, the sand path has been replaced with a mosaic of colored tiles. The same can be said for the area in front of the Western Canteen.

Two years back, a new field opened up to the west of the main hall – stretching from the south of Amma’s house to the Western Canteen and westwards to the Beach Road. This field now holds numerous gardens, extra seating for the canteen, and a small two storey flat. An additional cow shed which houses six indigenous cows is by Amma’s room now.

Additional flats have sprung up. To the far south of the Ashram, on the eastern end of the field that a few years ago held Amma’s Birthday celebrations, new flats rise two stories tall. A wide balcony promenade stretches the length of the complex on both floors. On the western end of the field just past the horticultural center are the multisided Cottages. The architectural style of these buildings reflects the tropical feel of the palm tree covered surroundings. 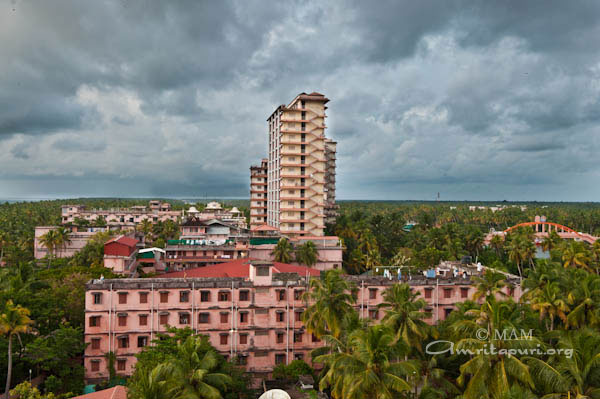 One of the most impressive of all the changes that have taken place is that the Ashram now has a fully developed composting system. Each day, more than one tonne of food waste is collected and brought to an area in the southeast corner of the Ashram where, over the course of two months, it is transformed into compost. Part of the fresh compost is used in the tulsi fields and gardens around the Ashram. The rest of the compost is brought to the worm farm where, in two more months, over 50,000 worms will turn it into rich soil.

Even the area surrounding the Ashram is changing. New stores have sprung up in Valikkavu, the University campus has expanded, and a few kilometers north of the Ashram, a new bridge has been completed which connects the peninsula to the mainland. Since the tsunami of 2004, four new bridges have come up connecting this island to the main land which brings the total no of bridges to five.

The more one walks around, the more one spends at Amritapuri, the more one notices these changes. While the Changeless One sits on stage in the main hall giving darshan and consoling the multitudes, the external world revolves around in all its chaos.