Amma’s US tour is about to start. Before every tour, Amma makes it a point to meet each and every Ashramite. Usually it takes more than 10-12 days of continuous Darshan for Amma to meet everyone and each day Amma would have to sit more than 15 hours, receiving one and all, listening patiently, giving instructions with cajoling words and directing the path to inner peace. On the penultimate day before the tour, Amma came out into the Kali temple and like any Satsang day, Amma started directing Seva and pinpointing the need of Sadhana to the ashram residents{news}. As Amma was leaving the temple, she announced that she would come back that evening to make and serve Dosa1 to all. 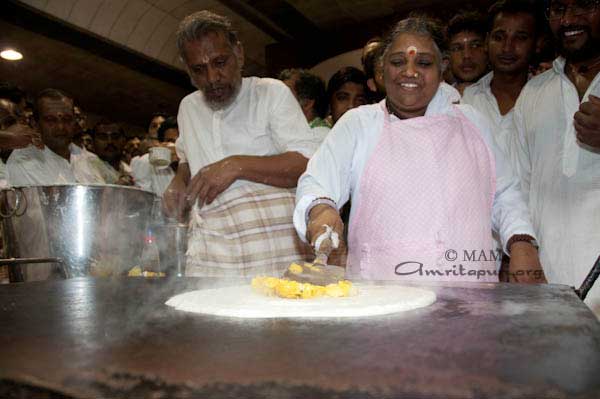 Amma had called the kitchen incharge some time earlier and had told him that some children had asked Amma for a dosa. The person first received the news without realising that Amma was serious on her plans. Amma then asked his estimates for the total number of people, logistics and time for making dosas for the entire Ashram. The kitchen incharge, realizing that Amma would really be making them, soon did his estimates. One may imagine the panic state of the kitchen incharge: a group of friends call and tell you they are coming to your place for dinner and that they need a specific menu and all that within two or three hours. Imagine the trepidation when that number is over 3000! The gas cylinders, dosa stoves, potato peeling and preparation of the masala, personnel to make dosas, batter flour, kitchen instruments and vessels, just to point a few.

They had initially planned Ghee roasts2. During the Satsang, Amma asked everyone what they would prefer and how much they would eat. To the question on what dosa they would prefer, someone said masala dosa3. Amma then asked how many dosas one would need. Many said one, some said two. So at 3 pm that day, Amma asked for masala (the spicy potato paste) that goes into the dosas to be prepared. She had estimated 3000 people. In less than 3 hours, both masala and the rice batter were kept ready.

There was a lot of excitement. The main bhajan hall already had 12 dosa stoves set up before the evening bhajans. People came and sat around them to attend the Bhajans. A 90-year old Ashram resident (a.k.a Pattiamma) had climbed up with Amma as Amma had come into the stage. As Amma entered the stage, Pattiamma had requested Amma to sing a particular song on Sri Lalita. Bhajans started and Amma’s singing took many into the earnest thoughts of unconditional joy. Amma paused the bhajans in between and asked for a microphone to be given to Pattiamma and asked her to sing a bhajan. Despite her struggle for breath, Pattiamma sang a beautiful song ‘Sivakamasundari Jagadamba’ in classical style calling out to the Divine Mother. 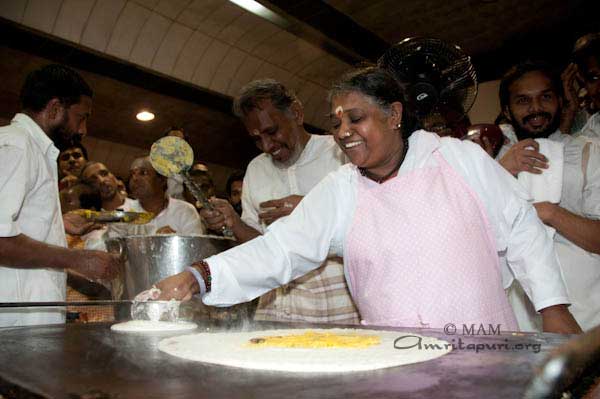 Amma’s mood and expression was so mesmerizing blissful and her eyes filled listening to Pattiamma. Immediately after that, responding to Pattiamma’s request, Amma then started singing a bhajan on Sri Lalita and after singing a few lines stopped while the music was still playing and said “Pattiamma had wanted a bhajan on Sri Lalita but it was not this one. I was enthralled in the words and bhava of her song, given her age, so I lost my mind”. Amma then started another beautiful bhajan on Lalitamba. After Arati, Amma walked right down the stage to the dosa stoves.

Amma started making Masala Dosas. What a sight! A small pan of batter, she would take and spread it thin on the hot plate, someone would sprinkle a bit of oil, another would place a bit of potato-masala in the center. Amma would then make another one just like that on the other side of the hot plate, pouring from the cup and spreading it slowly as someone would sprinkle oil and put some masala. By that time, the first dosa would be ready and Amma would take the dosa, roll it with the ladle and place it on an awaiting plate ready to be served. Someone tied a pink apron on Amma while she cooked.

She made many dosas. Amma’s handling the dosa batter, the drawing of a thin layer using the pouring cup and especially the way she rolled and ladled out the dosa seemed so uncanny and professional. On the contrary, Amma had mentioned while coming the ramp from the stage that she does not know how to make masala dosas. After making many dosas, Amma started serving them herself. Simultaneously boys and girls started making dosas in the other 12 stoves. On either side, one could notice several stoves and many ashramites making dosas. Some stoves had 2 dosas simultaneously, some others had 3 and some larger ones had upto 6 at the same time. With water sprinkled after every round, dosa stoves were creating sizzles of white vapour at random intervals. Plates were set on benches, curry ladled out and then the plates were passed to Amma.

One by one people came and got their share of Masala dosa from Amma. The whole hall had been full with visitors, devotees, students and Ashramites. Amma would ask for a show of hands to those who did not get their dosa and count them fast and send plates in that direction. Amma mentioned “Children eat well, need more take more, I want to see your stomachs full so I can be happy. If you eat, I will be full and happy tonight”. Amma said “We can sing bhajans after you all eat!”. Soon after serving all, Gita was chanted. It was so nice to also see Amma had joined us to taste the dosas. Two bramhacharins had made her big dosas. She took tiny bites relishing the taste that her children had given her from the same batter from which she had made for all her children. More than three thousand dosas were done. Amma happily said “In one hour we all did it”.

Amma then sang a beautiful bhajan “Bandalo Bandalo”. ‘Bandalo’ talks of the joy that a devotee experiences in the company and with the arrival of the Divine Mother (Devi). Following the beats, Amma asked everyone to clap hands with each other. Many smiles bloomed as the tune grew faster. Amma then requested everyone to pray for world peace and sang the song “Kushiomke Bahar” that ends with the words “Lokah Samasthah Sukhino Bhavatu” (May there be peace to everyone in the world).

Truly, it was a spiritually enthralling Masala dosa fest.

In a few hours, Amma would leave for the US tour, to spend the next 8 weeks with her children there.