The next stop on Amma’s 2011 Bharata Yatra was the capital of Gujarat, Amdavad. Amma held a public program at the Educational Society Ground in the evening of March 10th.
During the program Amma extended several of the ashram’s charitable projects to the region.  Scholarships were distributed to more than 50 local students as part of the Vidyamritam project and many of the local Amrita Vidyalayam students were given handkerchiefs as part of the Amala Bharatam Campaign. 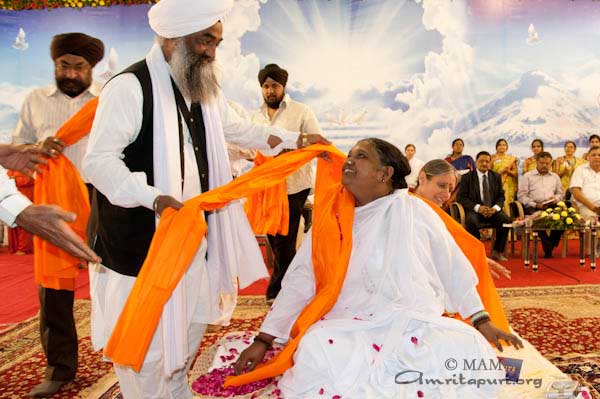 Several dignitaries were on hand to officially welcome Amma to Gujarat, including: Chief Justice of the Gujarat High Court, S.J. Mukhopadhyay; Additional Chief Secretary, R.M. Patel; Principal Secretary, K Kailash Nathan; and Joint Commissioner of Police, Mohan Jha.
Members of the Sikh community of Ahmedabad presented Amma with Saropa (the highest honor from sikh community) in recognition for her outstanding contributions to humanity throughout the world.

As she has been doing everywhere else on this tour, Amma lead the Manasa puja for the first time in the local language, this time in Gujarati. At the end of the puja the crowd enthusiastically applauded showing their appreciation for Amma’s efforts to communicate with them in their own language.

During the darshan the local Amrita Vidyalayam students and teachers performed a variety of both modern and traditional dances. But the dancing didn’t end with the formal performances. Near the end of the the darshan several local women spontaneously filled the stage and performed a lively Garbha dance for Amma.  Spirits then remained high as Amma ended the darshan by singing  Mayaji and Pukare Mayya. 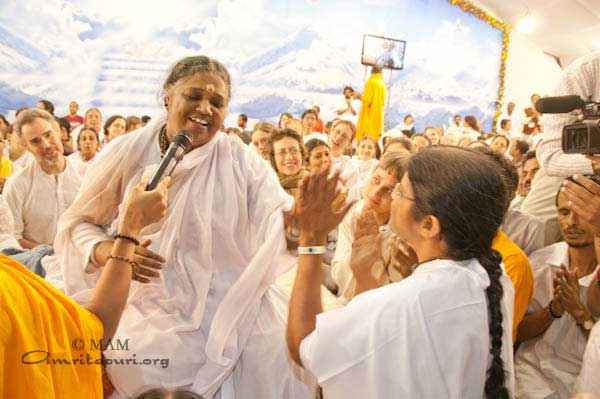 Amma and the tour group arrived in Amdavad a day before the scheduled program there. That evening before the program day, Amma delighted everyone by asking for dinner to be served at the roof of the school building. It became like one of the usual tour ‘chai stops’ with Amma giving satsang and asking everyone to reflect more on the topic she had brought up few days before about  performing one’s dharma and responsibilities in the materialistic world while keeping a loving and compassionate attitude. A few people came up with their views, then Amma sang upbeat bhajans along with everyone.