It was Kodungalloor that Amma reached next, after the successful program at Kozhikode. Kodungalloor is the site of the first Brahmasthanams born out of Amma’s sankalpa. 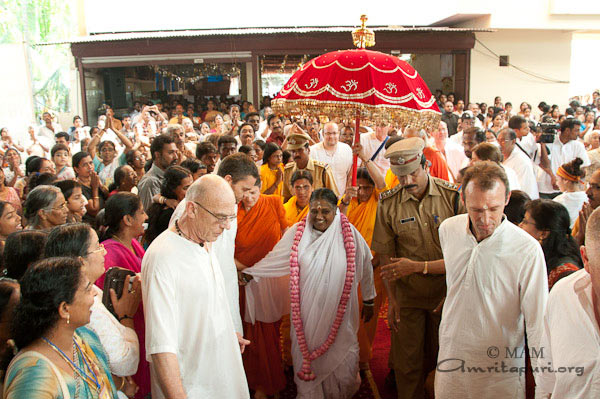 The stage was filled up by many dignitaries, on the first night of the program on 6th. Notable were AICC secretary Tom Vadakkan, Thrissur Mayor IP Paul, KP Dhanapalan MP, and Viswambaran IAS the Vice Chancellor of Agricultural University.

Tom Vadakkan, sharing his views on motherhood and love, said ‘Motherhood has universality,’ and looking at Amma, he continued ‘and that motherhood is here, right in front of you.”

Vidyamritam Scholarship and working capital to Self Help groups were distributed. The dignitaries helped hand over these to the beneficiaries.

As a step towards fulfilling Amma’s wish, villagers of Kaipamangalam took mass-oath to make theirs an intoxicant-free village.