Amritapuri, New Year eve 2011
The dawn of 2011 was celebrated in grandeur with Amma here at Amritapuri. In addition to Indian devotees, more than 1500 visitors from abroad had flown in to be with Amma for the new year. The evening hall was packed and every corner had people from various regions and languages. One family had even driven all the way across Europe and middle-east to reach Amritapuri by road. Immediately after evening bhajans, the hall was rearranged with Amma’s seat in the center. At 10, cultural programs commenced the celebrations. It was raining heavily outside. 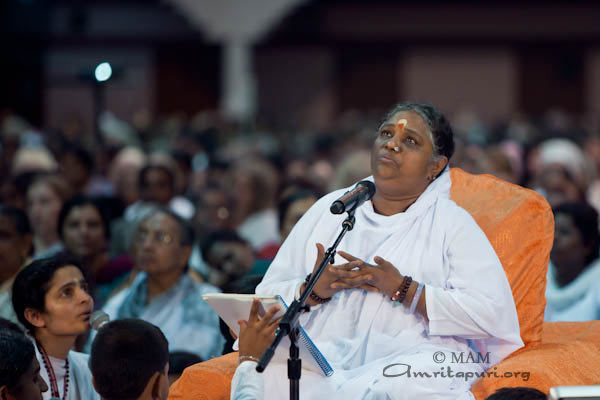 Ganesha Vandana, a Bharat Natyam dance was the first of the performances. Student groups of Amrita University presented a skit on “Amala Bharatam”- Amma’s recent India clean-up initiative. A rap song, themed “Lokah Samasthah Sukino Bhavantu” was performed by Ayudh UK. The next dance was by Gauri, a tiny tot who enthralled the audience with her exquisite Bharata Natyam dance. After the performance, Amma took her on her lap and asked a few questions; the shy Gauri flashed a smile that lighted up everyone watching the scene. The last two performances included a symphony of English songs followed by a dance themed on Hanuman Chalisa.

It was 11:52pm and Amma started her satsang, “Rather than giving a message, Amma would like to pray for World peace and happiness”. Amma wished her children to always remain happy. “May love, light, compassion, fragrance and beauty fill your heart in this new year”, Amma concluded. 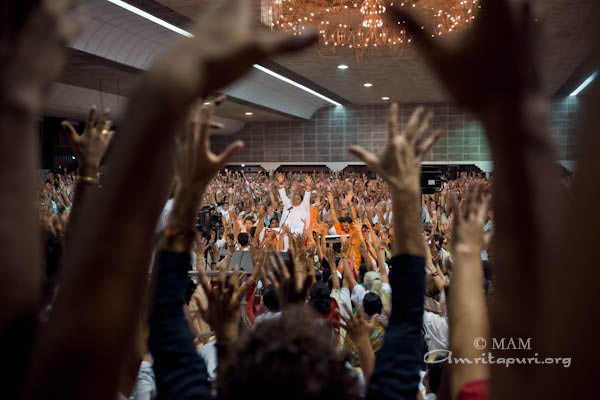 She sang the bhajan “Kushiyon ki bahar”, a song that talks of continued happiness in life, ending with the phrase “Om Lokah Samastha Sukhino Bhavantu – May all beings be happy”. As Amma chanted “Lokah Samastha”, the whole hall repeated it. As the chants continued, tears swelled in Amma’s eyes. Amma then asked all her children to forget everything and sing with joy and with a mood of celebration. As it finished, she raised her hands and hailed “Mata Rani ki” and whole hall resounded with a loud “Jai”. Amma’s raised hands were met with everyone raising theirs and the wave of open palms prayed for world peace and happiness.