In celebration of the 61st anniversary of India’s freedom, the students of Amrita University (Amritapuri campus) put on a series of dramas and dances inspired by India’s culture, history and current events. In the centre of the hall was a huge map of the Indian subcontinent outlined with the fires of small oil lamps. The students’ program culminated with a girl carrying the Indian flag to Amma, who stood serenely waving it as the students sang Vande Mataram. The whole crowd was waving small flags in rhythm with Amma. 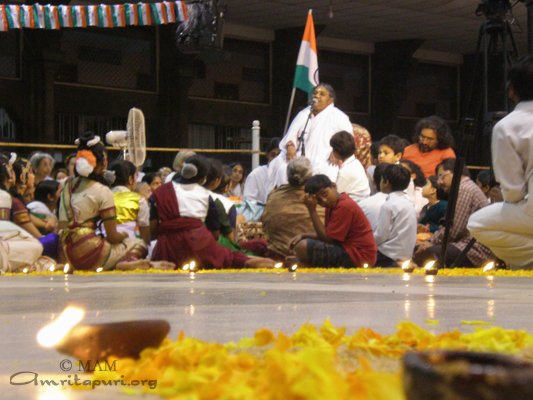 Amma then spoke, saying that the love the students were showing for their motherland made her very happy. “May this love towards our motherland remain with you no matter where you find yourselves in the years to come,” Amma said.

Amma continued, “We should not only love and respect our own motherland, but the entire creation. The reason is: there is nothing that is not God. This is what India’s culture teaches us. This mental attitude itself is the path to true freedom. Through the example of their own lives, the rishis—who were embodiments of austerity, renunciation and universal love—revealed to us many great ideals. The true way of expressing our love and dedication towards our nation is imbibing these ideals and putting them into action in our own lives.”

Amma went on to speak about true freedom versus mere freedom of the body, saying that as long as one remains a slave of his negativities, one can never experience true freedom. “Our identification with our lower emotions is a much more oppressive and dangerous form of slavery than bondage on the physical level,” Amma said.

“The word mama—‘mine’—is death; it is bondage,” Amma said. “The words na mama—‘not mine,’ but the Lord’s—are freedom and liberation. My children should remember this always.”

The program ended around 1 a.m., with Amma leading all the students in singing the bhajan “Mata Rani,” crying out “Mata Rani Ki Jai! Bharat Mata Ki Jai! Loka Mata Ki Jai!” over and over again.