On Tuesdays, Amma meditates with the residents in the old temple. Then She answers questions posed by the residents. Ever the embodiment of humility, Amma sometimes says that She feels Her answers are not complete, and that She would like Her children to say something in addition. Today, Amma asked Her children to share resolutions or vows they would like to take for the coming year.

One resident responded with a prayer that world peace would finally dawn in 2003.

Amma replied, “For world peace to come, unity is needed. Unity is the substratum of world peace. By the light of one zero-watt bulb, even one student cannot study. But if 25 bulbs are connected together in a series, even 2000 people can sit together and they can all read by that light. This is the importance of unity. Once there is unity, all differences will cease to exist and there will be world peace.”

As the numbers of devotees that come for Amma’s daily darshan grow, Her darshan stretches on later into the afternoon and evening. Tonight, Amma didn’t finish giving darshan until 6:30 p.m. While Amma often comes for bhajans by 7, last night many wondered if She would be able to come at all. After all, it was already so late, and She would have to go to Her room at least to change clothes, if not bathe, eat something, etc. Or so the thinking went.

As usual, the crowd spilling out behind the temple, waiting for Amma to come down had left a path open for Her to walk to Her room. But when Amma reached the base of the spiral stairs, rather than take the path prepared for Her, She said only, “OK,” and made Her way through the crowd and directly to the bhajan hall. Everyone rushed to join Her. Rather than take the time to freshen up, Amma came for bhajans earlier than She usually does. Sitting up on the stage, Her sari rumpled and stained by the day’s darshan, Amma was more beautiful than ever, more so for the beauty of the lesson She was so pointedly teaching us by Her example. 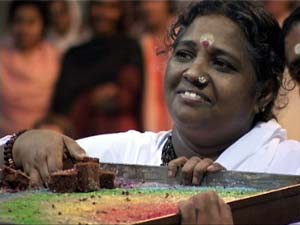 As is the tradition on Christmas Eve at Amritapuri, dramas, comedies, songs and dances were performed by residents and visitors alike. Amma blessed the performers and the audience with Her presence throughout the evening. By the time She blessed the Christmas cake and went up to Her room, it was already Christmas.

As always, Amma’s Kozhikode programmes are burgeoning with life and love–just like Amma Herself. Somehow, Amma found time to give a press conference in Her room, even though darshan had finished only at 4 am and She had to be back out to begin the day’s programme by 11 the same morning. 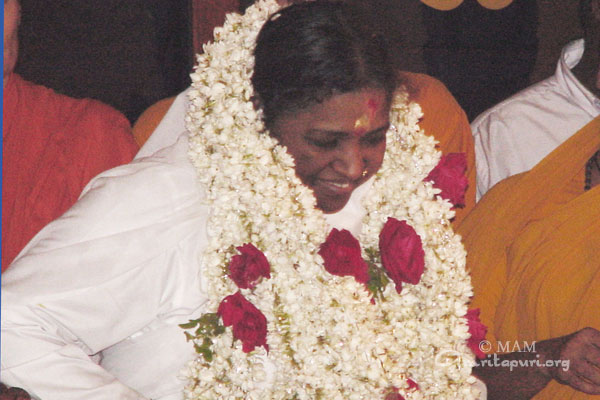 Here you will also see the crowd, which is growing larger with each passing day, and photos of devotees participating in this evening’s Mars puja. At Amma’s Brahmasthanam festivals, Mars is propitiated in a mass puja in order to alleviate suffering that can arise when a person’s life is under the influence of this planet. (Amma teaches that it is not the planet which causes the suffering, but our own past karma which bears fruit during these periods. However, by performing the Mars puja with faith and devotion we can ease the suffering experienced during these times.)

Here you can also young students of Amma’s Amrita Vidyalayam, onsite at the Kozhikode ashram, singing bhajans in earnest as Amma gives darshan before them.

On the afternoon of the last day of Amma’s programmes in Kozhikode, the queue of devotees waiting for Amma’s darshan coils tightly back and forth across the ashram grounds before stretching all the way to the highway, nearly a kilometer away. These devotees have been waiting patiently under the sun for many hours, and will have to wait many more–up to 16 hours for two seconds in Amma’s arms. Mothers wait with their children. Whole families wait together, representing three generations. Some wait by themselves–alone but for their thousands of spiritual brothers and sisters, each one waiting to see their Amma. Volunteers work tirelessly up and down the queue, offering water and providing whatever assistance they can to those in the queue. The waiting devotees show only patience, forbearance, and faith. We have seen individuals with qualities such as these, but have we ever seen a crowd endowed with this same spirit? Though each one will only spend a moment in Amma’s arms, it is clear that Amma is with them even now, and will remain with them after She physically leaves Kozhikode tomorrow morning.

Looking at the throngs of Amma’s children, it is impossible to imagine that before She leaves in the morning, She will embrace each one–all 17,000 of them. And yet She will. How could a mother do otherwise?

This evening Amma conducted a mass Sani (Saturn) puja, in which some 5,000 devotees participated. Amma has said that pujas conducted in a large group such as this are many times more beneficial than pujas conducted in small groups or alone—for the individual and the world. During the puja, devotees offer drops of water into a clay pot, while imagining that they are offering all their sorrows to the Lord. After the puja, devotees carry the pot on their heads to the Brahmasthanam temple, where the water is poured over the murti inside. In this way, through Amma’s Grace, the water acts as a medium to help the devotee’s worries and cares to reach the Lord’s feet.

Recently, Amma mentioned that we all need patience, for there will be queues even in heaven. Here in the heaven that is Amma’s presence at Her Kozhikode ashram, there is quite a queue indeed. So let us all try to develop the attitude of surrender–offering our sorrows and problems to Amma. Let us also try to cultivate patience and forgiveness, no matter how much we are jostled around in life.

Amma arrived in Kozhikode (formerly Calicut), Kerala yesterday. The programmes here draw bigger crowds than nearly anywhere in the world. Amma will give darshan day and night for four days. She will likely embrace more than 50, 000 people, around one every three seconds. 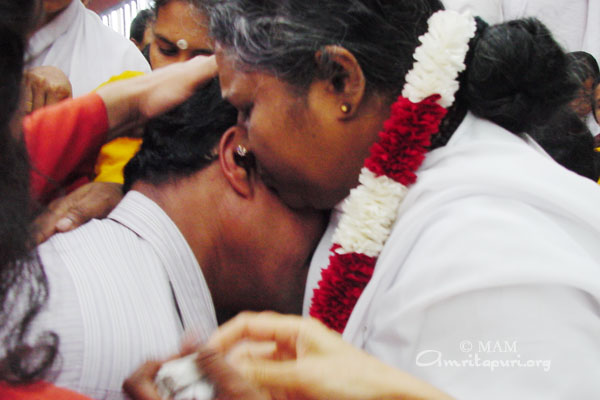 Here in Kozhikode, when the darshan programmes approach dawn each morning, and Amma may not even find time to sleep or eat, we are reminded of what Amma said once when someone asked Her if She had eaten.”I am eating love,” She said.

This marks the tenth anniversary of the consecration of the Brahmasthanam temple in Kozhikode.

A long time resident of Amma’s orphanage gets married
“I had always been troubled by the fear that being born the child of a beggar woman, I would have to spend my life begging in the streets, or in still worse conditions… 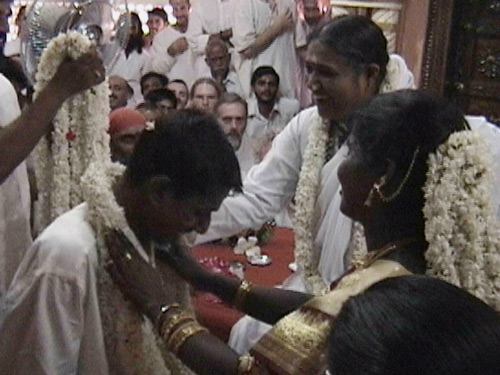 “As we slowly moved closer to Amma, my mind was throbbing. Would Amma give me a new life? Would She console this unwanted one, who was so hated by everybody? If Amma forsakes me, where will I go?

“As I reached Her lap, Amma whispered affectionately, with a sweetness of love I had never heard before: ‘My pearl… my darling daughter… do not worry… isn’t Amma with you?’ I burst into tears. I had been condemned by society’s callous judgement even before I could stand on my own; but now I wanted to shout again and again: “I am no longer an orphan, no longer a beggar!” – from Lakshmi’s story, Matruvani August 2001

Today was a very special day for Lakshmi, who grew up in Amma’s orphanage from the age of about 12 (born in poverty, she doesn’t know her exact age). Today, Lakshmi entered into wedlock at Amritapuri. The very same Amma who had taught her the alphabet when she first came to the orphanage performed the wedding ceremony. But first, Lakshmi spent time in Amma’s room, a daughter alone with her Mother on the morning of the big day. After the wedding, Amma received Lakshmi and her husband into Her lap. 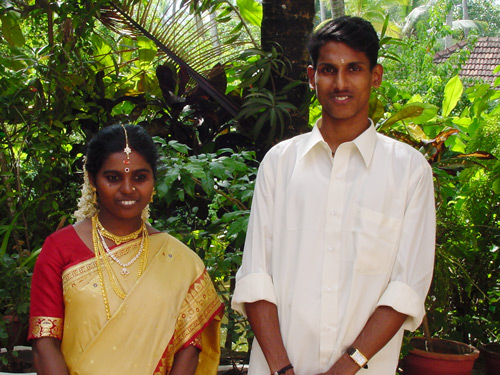 Amma is also providing a new home for Lakshmi and her husband, Mr. Ambu, who works at AIMS. Not only that, She is giving them a good start with a savings account which will help them to be financially secure.

Who says she is an orphan?

A young spiritual aspirant approached Amma with a long face. “Amma, I am depressed and I don’t feel like living,” he told Her. “I want to die.”

Amma replied strongly, but it was strength that the boy needed. “You are selfish,” Amma began. “You feel that you will get happiness by dying. At the same time, you don’t want to face the pressures or challenging situations that arise in life. But a spiritual aspirant should be selfless and live for others, and he should also be strong like a diamond within. People spend so much money trying to bring a person back to life. God has given you life. You don’t have the right to destroy it. Live selflessly and find strength within your Self.”

We can all find strength in the medicine of Amma’s words, especially in our darkest moments. Yet we need only remember that the Light of lights is looking after us, illuminating the way ahead, and the only thing for us is to keep taking steps toward Her.