Sri. Therambil Ramakrishnan, the Honourable Speaker of the Kerala Legislative Assembly, came to Amritapuri today in order to help the Ashram distribute 300 sewing machines to villagers and clothes to the children affected by the tsunami.

The clothes were given to the 6,000 children from Kerala’s Alappuzha District who participated in the Ashram’s free Yoga-English-Sanskrit camp last May. During the camp, the children’s measurements had been taken so that the Ashram could tailor-make the clothing for them.

The sewing machines were given to 300 women who have completed the Ashram’s tailoring classes, which are taking places in 10 centres throughout Alappad Panchayat, Kollam District, Kerala. Some 2,000 women have participated in the course during the past seven months. The Ashram is providing piecework for the women when they achieve proficiency. This enables them to supplement their family’s incomes by up to Rs. 2,500 a month.

In Amma’s presence, Sri. Ramakrishnan also took a few minutes to address all those assembled. “After Swami Vivekananda, who echoed the Indian culture and Vedantic principles in the West, Amma is the only one who has been able to make the waves of the Vedantic principles echo in the West,” said the Speaker. “Amma is the cultural ambassador of India.”

Sri. Ramakrishnan lauded the Ashram’s massive tsunami-relief programme, specifically the way its social programmes are helping the victims to help themselves. Speaking to the tailoring students, he said, “Amma has given you the instruments and training so that you can stand on your own two feet. Success in life lies in making proper use of such training. May these machines help you to gain strength to stand on your own two feet so you can support the future generations.”

Speaking to the children who’d come to collect their clothes, he said, “The garments that Amma has given you are not just clothes, they are something that a mother gives to her children out of love—they are the strength that binds you to the divine.” 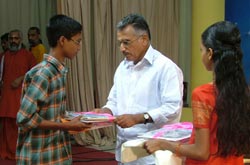 Also in his speech, Sri. Ramakrishnan said that nara-seva—serving man as a means of worshipping God—is the essence of Indian culture, and that Amma lives this principle to the letter. “Amma has become the consolation and love for those suffering from the tsunami. She came to their rescue. And we have the wonderful history of this before us. What the government body has not able to do in time was executed through Amma’s leadership. That truth we should not forget.”

He also asked everyone to reflect on Amma’s teachings and actions, saying that if we do so, we will realise that we have become selfish. “[In today’s society] we feel we don’t have time to think about the rest of society and other people. But concern for others is true culture—the thing that verily makes someone a human being.”

He concluded by saying, “We are lucky to have been born in the land where Amma was born, even luckier to meet her, and even more so to receive the touch of her consolation and love.”