As the morning sun finds its way through the canopy of coconut trees that shade Vellannathuruthu, a group of Amma’s devotees and disciples plods back and forth along one of the seaside village’s dirt pathways carrying loads of bricks—mostly upon their heads. 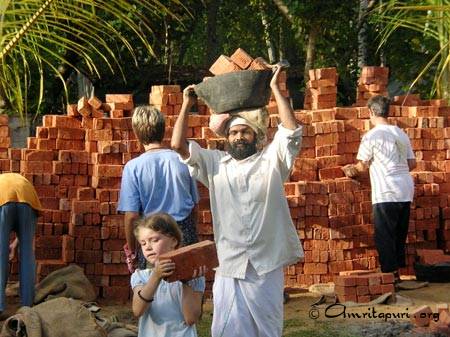 It’s hard work. But the men, women—and occasional child—work steadily and without complaint in an effort to complete as quickly as possible the 1,400 houses the Ashram is constructing in Alappad Panchayat as part of its tsunami-rehabilitation programme.

The construction has been going on for the past couple of months, and with 1,360 foundations already complete, the work currently at hand is erecting the brick walls. 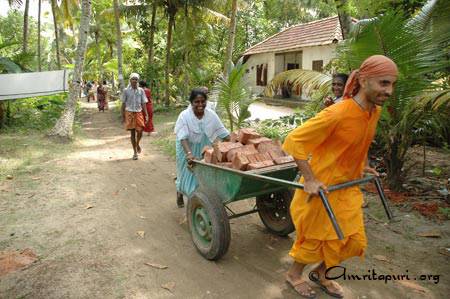 The problem is that the interior locations of Alappad Panchayat are accessible almost exclusively via various cramped and winding dirt pathways—pathways that often pregnant cows have trouble negotiating, not to mention lorries carrying a several tonnes of bricks. To make matters more difficult, the monsoon season has rendered the land very muddy, and small ponds are now overflowing, often submerging the paths altogether. Therefore the lorries have unloaded the bricks in central locations throughout the panchayat, and the ashramites are spending their mornings schlepping them from point A to point B, over and over again.

To be frank, at the end of a four-hour shift, the men and women look quite warn out, but spirits remain high, as their motivation lies in helping families that have been homeless for eight months return to normalcy. “When I first saw the images of the tsunami on television from Europe, I felt so sad that I couldn’t be there to help in person,” says Ed De Wilde, a 54-year old Belgium man who is currently visiting Amritapuri with his family. “I gave a donation, but it wasn’t the same thing as being there to help in person. So now I am happy that I can be here and really help the tsunami victims.”

Most of the Westerners still prefer to carry the bricks with their arms, either cradling a stack in front of their body as they walk or filling up a large burlap rice sack and slinging it over their back. But a few have taken to the traditional Indian method—filing a basket with seven or eight bricks and carrying it on top of their head. One Westerner when asked how he felt after using the Indian method for several hours joked, “About three inches shorter.”

Using a wooden board as a platform, some of the brahmacharis regularly make trips with as many as 16 bricks piled up in this fashion. Adding to this a nice wade through knee-deep water can make each trip a real exercise in mindfulness. But according to ashram history, 16 bricks is nothing. When Amma’s first batch of brahmacharis were constructing the Amritapuri temple, one of the current sannyasins set the Ashram record, carrying 45 bricks atop his head. 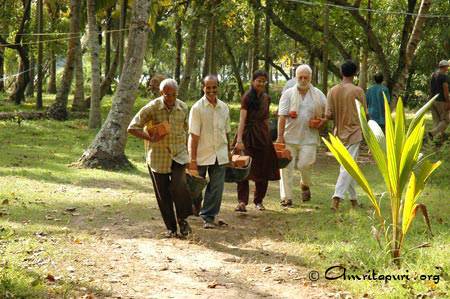 The brick seva will most likely continue for several more months. With each house requiring 13,000 bricks, it means that there are 18.2 million bricks to be moved about in all. But this figure in no way daunts Amma’s workforce. “We are not doing anything,” says one of the senior brahmacharis helping with the work. “Amma is doing everything, so what is there to worry about.”