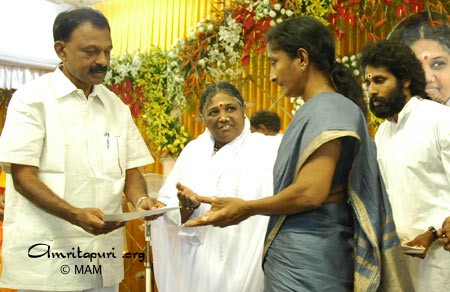 On the second night of Amma’s Brahmasthanam Festival in her ashram in Secunderabad, Amma was welcomed by two AP cabinet ministers and one member of parliament, all of whom praised the charitable social-welfare projects of the Ashram.

Sri. Raghuveera Reddy, the Honourable Minister of Agriculture for Andhra Pradesh praised Amma’s integration of spirituality with social service. “Amma is doing things that, in fact, the government does not dare undertake,” he said. Raghuveera Reddy then asked the people assembled to give some of the money they are spending on luxuries to organizations like Amma’s ashram.

Sri. Marappa, the Honourable Minister of Irrigation, spoke next. He praised Amma’s ability to provide needed service without the red-tape delays that plague the government. “For the government to do such projects takes a long time,” he said in reference to Ashram pension and free-housing projects. “The file has to be moved from person to person. Then only it goes the Cabinet. Then only it will come out as a Government order. And then still it has to be executed. But Amma is doing such projects alone without such difficulties. For this I offer Amma my prostrations.”

The evening’s final speaker was AP Legislative Assembly member Sri. Varadarajula Reddy. In his talk, he focused on how the Ashram makes sure all the money donated to it goes directly to projects for the poor. “In the world we see so many institutions, but most of them are bogus,” he said. “But this institution is legitimate. If they receive even one paisa, it will only go for service activities.”

In order to stress their faith in the Ashram’s charitable work, all three men pledged to make one-lakh donations to the Ashram. When Raghuveera Reddy made the pledge on behalf of his family, he also prayed to Amma to bless the Andhra Pradesh Government so that it is able to do more in general for the benefit of the poor.