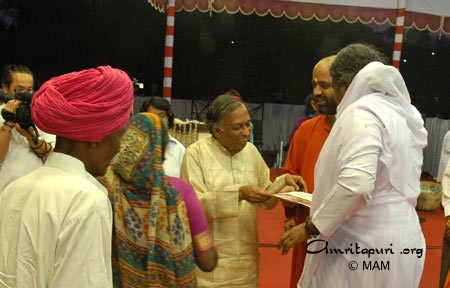 Padmashri Dr. Vijay P. Bhatkar, the eminent computer scientist and Chairman of ETH Ltd., was one of the dignitaries to welcome Amma to her program at Shinde High School Grounds in Sakar Nagar, Pune. In a short speech prior to Amma’s satsang, bhajans and darshan, Bhatkar spoke about the wealth of wisdom available in Sanatana Dharma’s literary canon and the place of Amma’s teachings within that canon.

“Why are all Amma’s books so important?” Bhatkar asked the approximately 10,000 people assembled. “There are lot of questions: What is liberation? What is spirituality? What is science? How can my birth be fulfilled? Why do I experience sorrow? There are a lot of such questions. And these are very important questions that need to be answered in our lives. The answers to these questions we see in various scriptures—the Vedas, the Bhagavad-Gita, etc. Amma’s disciples have asked such questions to Amma many times, and Amma has provided such simple and profound answers, illustrated with stories. And we find these answers recorded in the publications of Amma’s ashram.”

Bhatkar then helped Amma distribute checks to new enrolees in the Ashram’s lifetime pension program for widows and disabled people, Amrita Nidhi. This was followed by the distribution of 10 sewing machines to impoverished women in the Pune area by P.P. Chabria, the chairman of Finolex, Ltd. G.P. Panse, the department chairman of NCL, then released a Marati edition of On the Road to Freedom, a book written by Swami Paramatmananda, one of Amma’s senior disciples.